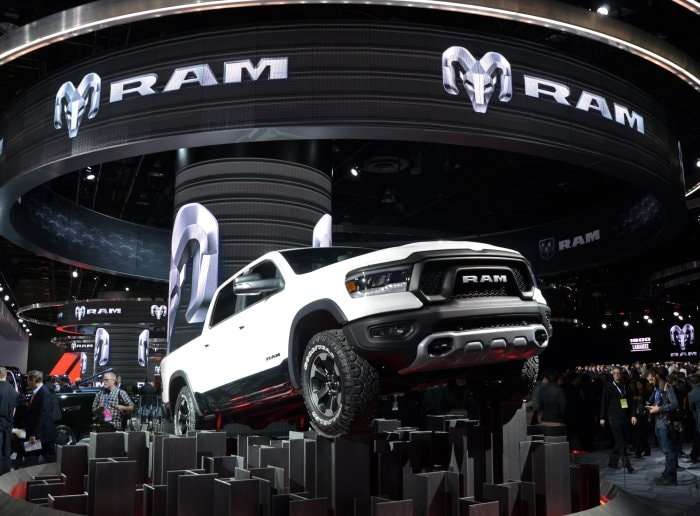 If you have been waiting to buy one of the all-new Ram 1500 pickups until the Hemi eTorque mild hybrid system was available, your wait is over – as the first units have begun shipping to dealerships around the United States and some buyers have already taken delivery of the hybrid V8 pickup.
Advertisement

When the all-new 2019 Ram 1500 was introduced earlier this year in Detroit, the biggest news was the introduction of the eTorque hybrid system to the popular half-ton pickup. This mild hybrid system is slated to be standard with the Pentastar V6 engine and optional with the 5.7-liter Hemi, but when the new trucks went on sale earlier this year, they were only available with the standard, non-hybrid Hemi.

That changed this week, with the first examples of the hybrid-powered 2019 Ram 1500 pickups with the Hemi V8 began shipping to dealerships around the country. We have confirmed delivery to dealerships on both coasts and at two dealerships in the middle of the country, so it seems that this is the start of the full rollout of the fuel-friendlier Hemi.

Hemi eTorque
The 5.7-liter Hemi V8 in the 2019 Ram 1500 offers 395 horsepower and 410 lb-ft of torque, whether or not it is equipped with the eTorque hybrid system. However, the eTorque system provides 130 lb-ft of torque at points in the powerband where normal engine torque is low and in the most need – like when you are accelerating away from a stop. Mind you, it does not add 130 lb-ft of torque to the engine’s torque, so the combined system power is still 410 lb-ft, but in a variety of situations where engine torque is low – the eTorque system kicks in to help out.

More importantly, the aid of the eTorque system makes the hybrid Ram 1500 a bit more efficient, getting 2 miles per gallon better in the city, 1mpg better on the highway and 2mpg combined.

I have driven a handful of the new Ram trucks and I was very impressed by them, but I only drove the new half-ton with the non-hybrid Hemi. Having driven the new Wrangler with a similar eTorque system, I cannot imagine that there is any downside to having the hybrid system for $800, so those folks looking to buy a Hemi-powered Ram 1500 may want to take the eTorque model for a spin before making a purchase.

A big thanks to those dealership representatives who confirmed the information on their Hemi eTorque inventory and to the folks from Ram for confirming the delivery plans!

DeanMcManis wrote on July 27, 2018 - 7:13pm Permalink
The price of the hybrid system on the V8 is mild at $800, but so are the benefits at 15/22MPG. The Hemi V8 Hybrid does have 400HP! But Dodge's own EcoDiesel Ram is rated at 22/29, and the EcoDiesel has the same torque as the V8 model. But still it is nice to have choices, and if you want a V8 Ram that gets decent gas mileage, it is out there now.
Andrew wrote on July 30, 2018 - 4:35pm Permalink
I’m still waiting to see a rebel on the lot here in mass.
Ed wrote on July 30, 2018 - 6:40pm Permalink
Exciting..however still a concern given they have not released the MPG figures. does this make any difference? time will tell.
Mike Sik wrote on September 1, 2018 - 10:51am Permalink
GM and ford have the high horsepower in there half ton trucks. We really need to consider putting in the big 6.4 in our half ton trucks!