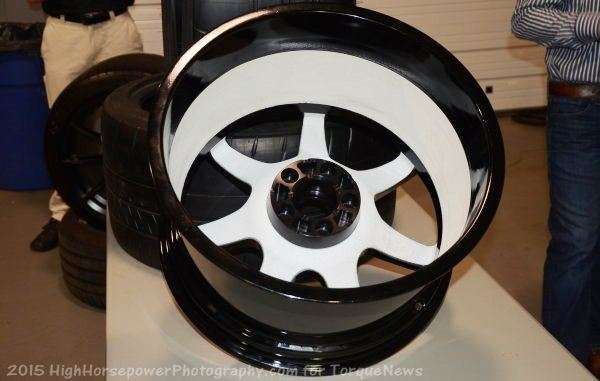 The new Ford Shelby GT350R Mustang is a work of automotive art designed to dominate road courses and while the new Shelby Mustang has a long list of unique features that make it amazing, the ultra-lightweight carbon fiber wheels – which have traditionally been reserved for far more expensive exotic supercars – might just be the most groundbreaking item on the new GT350R.
Advertisement

While we don’t know where the new Shelby GT350 Mustang will rank on the long list of great American performance cars, but it certainly has all of the nuts and bolts to be the most track capable muscle car of all time. Ford’s new MagnaRide suspension setup coupled with unique chassis components should allow it to get around the corners better than any Mustang before it and the high tech floating brake rotor design should afford it stopping forces like we have never seen in a muscle car. Finally, the new 5.2L flat plane V8 packing 526 horsepower and 429lb-ft of torque should provide the type of high-revving motivation that a car needs to crush the competition on a road course.

However in designing the 2015/2016 Shelby GT350R Mustang, Ford wanted to push the boundaries of the muscle car segment, introducing more extensive use of lightweight, high tech materials than we have seen from a factory built, road going muscle car. Most notably, Ford took a page out of the book of the European supercar builders, making the higher performance GT350R the first mass produced car sold in the United States to wear carbon fiber wheels which have been reinforced with liquid ceramic.

GT350R Carbon Fiber Wheels
The 2015 Ford Shelby GT350R Mustang is the lower production model of the two, and it takes weight reduction to the next level. To do so, Ford teamed up with Australian firm Carbon Revolution to come up with a wheel that was as light as possible and durable enough to stand up to the worst that both track and street use have to offer. Mind you, the GT350R isn’t the first car to wear carbon fiber wheels, as the super-exotic automaker Koenigsegg offers carbon fiber wheels on their cars and some aftermarket companies have introduced a carbon fiber wheel design – but no other car sold in the USA has come from the factory with a carbon fiber wheel. To make sure that the GT350R wheels were tough enough to handle road and track use, these wheels have been strengthened with a unique liquid ceramic coating process. First used to coat the turbines of the space shuttle, this process applies a thin layer of ceramic to key stress points on the wheel, including the inner barrel and the spokes. The image at the top of this article shows the inside of the GT350R wheel, with the ceramic in white while the black portions are carbon fiber.

Super Strong, Super Light
While the carbon fiber, ceramic coated wheels of the new Ford Shelby GT350R Mustang are strong enough to endure a curb strike or some wheel-to-wheel bumping on the race track, they are also incredibly light. To be exact, each of the wheels weighs just 18 pounds, where a comparable wheel made out of aluminum weighs closer to 70lbs, shaving some 60 pounds from each corner. Removing 240lbs from any performance car can make a big difference, but removing 240lbs of weight from the wheels will improve the capabilities of the new GT350R in every way. Compared to using a heavier wheel, the GT350R with the carbon fiber wheels will accelerate, brake and steer better – making the car an all-around better track car simply by implementing space shuttle technology to the wheels of the new Mustang…one that costs under $65k.

Winfield Coachman wrote on August 26, 2015 - 11:53am Permalink
I believe you're overstating the weight savings. An aluminum 19 X 11 performance wheel won't weigh 70 lbs. That weight is most likely for the wheel and tire, of which the tire is typically more than half.