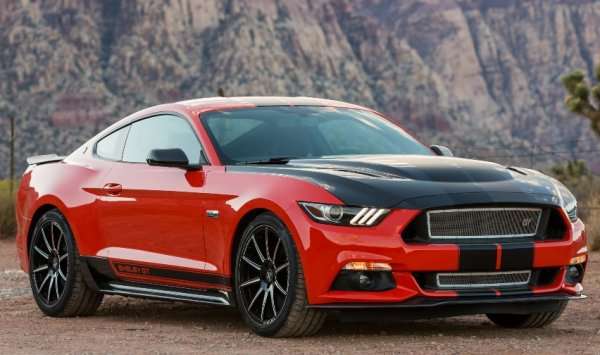 The newest Shelby GT Mustang has arrived and it is turbocharged, but rather than a V8, this new Shelby GT calls on the 2.3L EcoBoost 4-cylinder mill for its motivation – although the package is surprisingly expensive.
Advertisement

In the past, Shelby American has offered their Shelby GT package as a mild performance upgrade for the Ford Mustang GT. The Shelby GT name most recently adorned the 2014 Mustang GT, and back then it was an appearance and handling package with an optional supercharger upgrade with the Shelby GT/SC. Prior to that, there was the 2007-2008 Shelby GT Mustang, which was an appearance and handling package for the Mustang GT, with a few extra ponies added through intake and exhaust upgrades.

The new Shelby GT Ford Mustang follows the trend of the 2007, 2008 and 2014 Shelby GT, except instead of building only on the Mustang GT, this 2015 Shelby American Mustang builds on the EcoBoost package.

The package begins with a Shelby exhaust system and an engine tune which lift the output from 310 to 335 horsepower, but as has been the case with the other Shelby GT Mustangs, the real story is appearance and handling. The exterior upgrades include a unique hood, front splitter, rocker panels, a rear spoiler and a taillight panel all made from lightweight carbon fiber. Next, unique upper and lower grille fillers, unique badges, unique stripes and 20 inch Weld wheels complete the Shelby GT exterior design, while the Ford Racing handling package bolsters the aggressive stance.

Of course, while the Ford Racing suspension bits give the car a mean stance, they also give the new Shelby GT improved handling capabilities with the help of the Michelin high performance tires.

So, the Shelby GT package adds a little power, a whole lot of handling capacity and a ton of exterior attitude that is unfortunately absent from the stock EcoBoost Mustang.

Available Around the World – for a Price
The 2015-2016 Shelby GT based on the Ford Mustang EcoBoost will certainly offer new levels of all-around performance for those folks who bought the fuel-sipping turbocharged Mustang, but it comes with a hefty price. This package starts at $23,995 and that doesn’t include the cost of the car itself. When you factor in the base price of the EcoBoost Mustang ($26,295), the new Shelby GT EcoBoost has a base price of $50,290 – and that is a whole lot of money for a 335hp Ford Mustang. However, it carries with it a great deal of exclusivity that you can only get with a Shelby Mustang and, most importantly, it will be available in markets all over the world.

“Ever since Ford announced that its terrific new Mustang would be available worldwide, requests for Shelby versions of the car have rolled in from across the globe,” said Joe Conway, Co-CEO of Carroll Shelby International and CEO of Shelby American. “Since the majority of Mustangs that Ford offers in many of those countries will be the EcoBoost model, our team has been developing a Shelby GT model for the nimble new turbocharged four cylinder car, as well as the V8 powered GT. This package was specifically developed for the recently announced network of Shelby Mod Shops that will stretch from Europe to South Africa, China and Australia. They will add the Shelby package to a Ford Mustang that a customer has purchased in that area.”

So, if you have a 2015 Ford Mustang EcoBoost and you want it to be faster and better handling, you can reach out to the folks from Shelby American to transform your fuel-friendly pony car into a road handling beast with a unique, striking exterior design.

rich faix wrote on October 21, 2015 - 4:21pm Permalink
why would any one pay $23,995.00 extra for that ugly looking car ? maybe if the gave me that amount i would take it. what makes it ugly? the aftermarket upper and lower grills, the slap on, non matching hood. the the charcoal or black wheels. also the twerpy 4cyl. engine. with the turbo being the only thing making it run fairly good. dump the suspension package, its too low ( pot holes, and speed bumps love this ) put a v8 in it, with lots of horse power.thats it. i have a new mustang gt, that i ordered out exactly the way i wanted it, and wouldn't trade it even up for one of those ugly looking, twerpy sounding engines in that shelby.