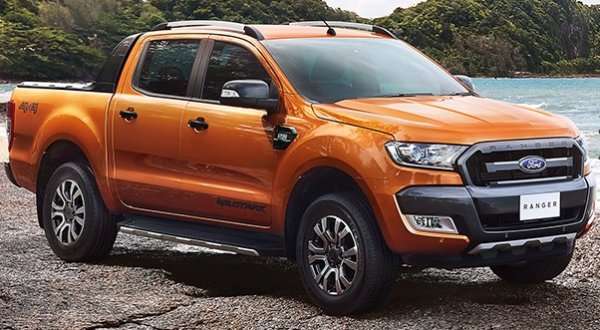 How the Raptor Could Exist in Australia, Where the F150 Does Not

The Raptor name is known in the US as making the Ford F150 the most off-road capable factory half ton truck on the market, but when this dinosaur-themed name comes to the Australian market, it could be a factory off-road package for the smaller Ford Ranger – a truck that Americans won’t be seeing on their local roads anytime soon.
Advertisement

This might seem like blasphemy to some F150 Raptor fans, but Ford Motor Company recently filed for a trademark of “Ranger Raptor” in Australia. This trademark filing was followed up by word of an Aussie Ranger seen testing with a handful of off-road friendly features, which has many people believing that the Raptor name could be used for a factory off-road package on the new Ranger midsized pickup. While some SVT Raptor F150 owners and fans might cringe at the thought of a little Raptor based on the Ranger, this could be a great offering for those folks who want an off-road ready Ford truck in areas where the mighty F150 isn’t available.

The Ranger Raptor
In Australia, the Ford F150 is not available, but those shoppers Down Under who wanted a Ford pickup have long been able to go with the Ranger since the late 1990s. During that time, the Ranger sold in Australia was similar to the one sold in the United States, but when the Ranger was discontinued for the North American market, the Australian market got a new design that is a little bigger, a little higher riding and - in the long run - a little closer to offering what American buyers get with the F150.

The 2015 Ford Ranger received a facelift along with a new Ranger Wildtrack package (shown above) that is promised to be the market’s most advanced truck, but for someone who wants an even more extreme Ranger from their local dealership, Ford Motor Company may roll out a Ranger Raptor. The spyshots caught recently show a truck with a roof mounted air intake snorkel, a bull bar, a higher than normal ride and flared fenders over larger tires.

This Ranger was clearly modified to do serious off-roading and it looks like a truck that could stand shoulder to shoulder with the F150 Raptor. Unfortunately, Ford Motor Company has declined to comment on the beefed up Ranger caught testing, but it certainly looks as though the Motor Company could be working on a way to get the Raptor name un Aussie dealerships.

Still No Ranger Here
Should the new Ford Ranger in Australia get a Raptor package, it will just be one more cool overseas offering that we will not get here in the United States. Ford has no plans to reincarnate the Ranger in the North American market and with the massive success of the F150 Raptor, I don’t foresee the Motor Company offering another vehicle that uses the Raptor name.

However, for those folks like in Australia, you might soon be getting a new Ford Ranger that will offer similar (or as close as you can get) off-road performance to the F150 Raptor.

Robert Ryan wrote on June 15, 2015 - 7:50pm Permalink
No the Ranger was not similar being a Diesel, You see them towing 26ft 5vers here. The Off Road Ranger is going to be more hard core than the U.S.Raptor having better Oof Road and payload capability
les wrote on June 16, 2015 - 6:37am Permalink
you americans are so lucky with your choice of cars for us in Australia to get an f150 raptor it has to be privately imported and converted to right hand drive which prices them out of reach to so many people that want one
nkfro wrote on June 17, 2015 - 2:18pm Permalink
les, that depends upon your definition of 'lucky'. You should be able to order right-hand drive straight out of the factory. US Postal Service has purchased RHD vehicles straight from the manufacturer for at least the last 50 years, so the tooling is there. Your wallet will still be going on a diet. Believe it or not, buyers in the US market face exactly the same obstacles as those in Australia. When I was truck shopping in February, my needs were simple - 4 cyl. automatic transmission with A/C (I live out in the desert) standard cab. The dealers are keeping ONLY extended or Super cabs trucks on the lot. Standard cab trucks went straight to auction and trade-in values for standard cab trucks were as much as 25% lower. Ordering straight from the factory carried a $2000 premium and delivery time was determined by when the next batch of standard cab trucks were scheduled to be built - in my case, 6 months. So that's your definition of lucky?