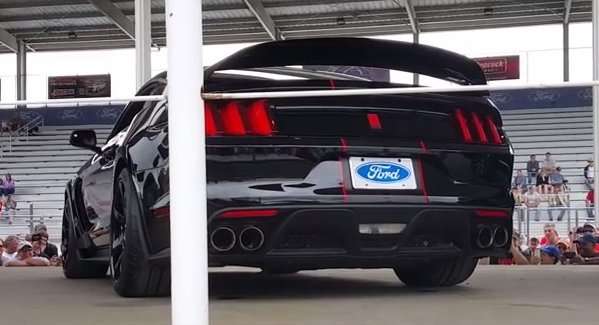 How the Ford Shelby GT350 Mustang Quiets Itself

The 2015 Ford Shelby GT350 Mustang will have a high performance exhaust mode with different settings for different volume levels and thanks to a YouTube user who was positioned perfectly behind the new super-Stang – we have a chance to hear exhaust system as the drivers toggles between the different modes.
Advertisement

The 2015 Ford Shelby GT350R Mustang will be a legend for a variety reasons, all of which focus around the performance capabilities of what should be the best handling muscle car of all time. One of the interesting features of the new Shelby Mustang that adds cool factor, but doesn’t necessarily any real performance is the dual mode exhaust system. While there might be some improvements in exhaust flow that slightly increases performance, the key purpose of the system is to let the 5.2L flat plane V8 scream as it should when being pushed to the limits while still being quiet enough to get to and from your house in the early morning and late evening hours.

To do so, Ford has equipped the new Shelby GT350 Mustang with an exhaust system that turns up the volume with the push of a button, so the driver decides whether he or she wants the Mustang to grumble or roar.

Adjustable Exhaust System Trends
General Motors has long offered a performance exhaust system for the Chevrolet Camaro with the LS3 V8 that gets louder under hard throttle and Dodge offers a similar setup that gets very loud when you put the hammer down with the 6.4L Hemi, but both of those systems work automatically. The exhaust system in the new Ford Shelby GT350 Mustang takes that design to the next level, including a switch that lets the driver flip from mode to mode.

Like the Camaro and the Challenger, the Mustang can be very quiet or very loud, but the Mustang takes loud to extra loud and with the new Shelby, you decide when you want the noise. This way, even under hard throttle, you can keep the car a little quieter when the situation calls for less exhaust noise.

For example, when launching hard in the 2015 Dodge Challenger Scat Pack, the car sounds beautiful, but it is very loud and it is quick to draw attention. The same is true of the Camaro with the performance exhaust, but with the new GT350R, the driver can leave the exhaust in normal mode. This way, the new Shelby Mustang can hand out beatings without drawing too much attention.

Then again, if you decide that you want to deafen everyone around your new Shelby GT350R when destroying a Corvette on a road course, a quick push of the button will let the engine roar like few other stock cars sold in this country.

The 350R Roars
The video below shows a 2015 Ford Shelby GT350R Mustang prototype on stage at a recent Mustang enthusiast gathering. Someone gets in the car and fires up the engine, and it sounds pretty good. Both at idle and with a quick rev, the flat plane V8 has the kind of raspy tone that you would expect, but we learn from the announcer that this is normal mode.

After a few seconds, the driver flips to the louder mode for the Shelby GT350 Mustang exhaust and the difference is remarkable. In this louder mode, the 5.2L flat plane V8 absolutely screams, offering a roar unlike any American production car that I can think of – at least in factory-stock form.

Without further delay, crank up your speakers and enjoy the beautiful roar of the new Shelby GT350R Mustang.

Kyle Edwards wrote on July 16, 2015 - 8:40am Permalink
The title of this article is "How the Ford Shelby GT350 Mustang Quiets Itself." I have learned nothing about HOW it quiets itself. Yes, I understand the driver will push and button to enable different exhaust modes, but tell me what is actually happening inside the exhaust.
John wrote on March 21, 2019 - 11:30pm Permalink
There is a right amd left muffler. Each muffler has two exhaust tips. The inside tip hasa solenoid on top which can be opened or closed with the switch on the dash, or the driving mode to sport or track. The outside exhaust tip goes through a normal baffled muffler, The inside exhaust tip is uses the unrestricted portion of the muffler allowing the louder exhaust. As a side note, 6th gear always uses the quiet exhaust and if you go above 3k rpm wide open throttle, the unrestricted exhaust solenoid opens making the car louder.