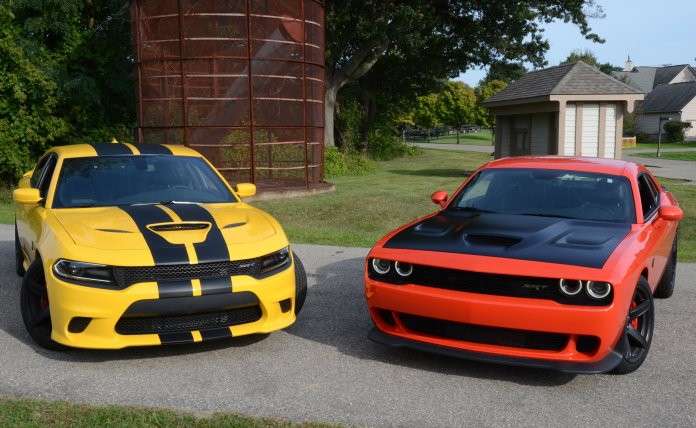 How Dodge Dominates RWD Sales in 2017 with Challenger, Charger and Viper

Although the Dodge Challenger finished third in the 2017 muscle car sales race, the combination of the Challenger, Charger and Viper make Dodge the leader in American rear-wheel drive sales – comfortably outselling Ford and Chevrolet.
Advertisement

If you ask representatives from Ford how many muscle cars the brand offered in 2017, they will likely say one. If you ask someone from General Motors that same question, they are prone to say two, since Chevrolet offers the Camaro and the SS sport sedan. If you ask someone from FCA, they will most certainly say two, with the Challenger and Charger taking on the performance world with some of the quickest, fastest and most powerful rear-wheel drive cars sold in America.

Of course, some people will dispute the fact that the Chevy SS and the Dodge Charger are muscle cars because they have four doors – these large cars share all of the muscle car attributes while also having a far more functional back seat. That is why the automakers may refer to them as four-door muscle cars and in my opinion, the title is fitting. Along the same lines, some people may insist that a 4-cylinder Mustang or a V6 Challenger might not be a muscle car, but do we classify the classic muscle cars with a smaller engine in some other group? No, we don’t…they’re all muscle cars regardless of the engine size as far as the industry is concerned.

In any case, when we add up the sales numbers for the performance-oriented, rear-wheel-drive-based vehicles sold in the US, Dodge dominates the class with the Challenger, the Charger and the now-gone Viper.

Dodge RWD Sales Vs Ford, GM
In 2017, Dodge sold 64,537 Challengers, 88,351 Chargers and 585 Vipers – leading to a total of 153,473 rear wheel drive, performance-oriented vehicles. Granted, a small percentage of those Chargers and Challengers are AWD models, but those models have extreme low take rates on a national level. Plus, many of the other cars discussed further on in this piece come with an AWD variant as well, but we will get to that shortly.

The only RWD cars offered by Ford right now are the Mustang and the low-volume GT supercar. With 81.866 units sold last year, the pony car was the leader in muscle car sales for the third straight year but with only 89 supercars delivered and no rear-drive sedan, Ford falls far short of Chevrolet and Dodge in terms of RWD car sales.

Chevrolet has the Camaro, the Corvette and the SS sport sedan. The Corvette was and always is the bestselling premium sports car in America with 25,079 units sold last year. The Camaro was the second-bestselling muscle car with 67,940 units sold and the Chevy SS sport sedan was the worst performer of these three with only 4,055 units sold in 2017 (the final year for the SS). When you add these all up, Chevrolet sold 97,074 RWD-based cars last year.

That makes Chevrolet the closest competitor within the Big 3, but with a gap of more than 50,000 units – Chevy is way behind Dodge in this sales race.

The biggest advantage for the Dodge is the Charger, as it is the bestselling rear-drive sedan sold in America by a comfortable margin. It is also the only rear-drive sedan in America with such a broad spread of performance models, including three different Hemi V8s with output ranging from 370 to 707 horsepower along with a 300hp V6.

Dodge Vs The World
The only companies that really challenge Dodge in the US market in terms of rear-wheel drive sales are Mercedes-Benz and BMW. Neither of those German luxury automakers offer a single car or even a few cars that come close to matching the numbers of the Challenger and Charger, but if you look at their entire car lineup, the numbers are close.

Every car sold in America by BMW right now is offered with standard rear-wheel drive, but many of the sedans are more popular in all-wheel drive form. Mercedes is the same way, offering nearly all of their cars in RWD, but AWD is a common option in their sedans. None of these companies break out RWD vs AWD sales numbers, but knowing how few AWD Challengers and Chargers that are sold relative to the AWD BMW and Benz sedans – Dodge likely leads those companies as well.

In other words, if you add up all of the cars from BMW or Mercedes-Benz that are offered with rear-drive, they outsell the Dodge Challenger and Dodge Charger, but those are the only real competitors for Dodge when it comes to performance-oriented, rear-wheel drive vehicle sales in the US.