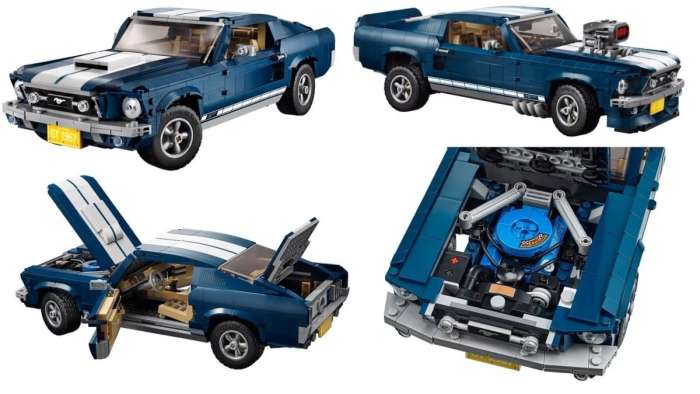 The classic 1967 Ford Mustang GT has been recreated in a new kit from Lego, with a surprising level of detail on the 13-inch-long assembled plastic muscle car.
Advertisement

Lego has introduced a variety of automotive block kits in the past few years via their Speed Champions series, but the latest high performance package is part of the Lego Creator line, with the 1967 Ford Mustang GT being the newest American performance car to be offered in block form. The Speed Champions series offers a 1968 Ford Mustang and a 2015 Ford Mustang, but those were both smaller kits, with the assembled cars measuring about 5 inches while being comprised of less than 200 pieces.

On the other hand, this new 1967 Ford Mustang GT is nearly three times the size when assembled, with the 1,471 pieces coming together to measure 13-inches long. The increases size allows for far more detail, but of course, it is considerably more intricate to assemble, being classified as an “Expert” kit.

Kit Details
The new Ford Mustang from Lego doesn’t officially state the model year or trim level in the kit name, but it is looks like a 1967 GT fastback and the Michigan license plate reads “GT 1967”. The hood opens to reveal a tiny 390 V8, the trunk opens to show the hidden nitrous oxide bottle and to get a better look at the detailed interior, the doors open and the roof can be removed. The assembled car is 13 inches long, 3 inches high and 5 inches wide. The kit is finished in blue with white stripes, torq-thrust style wheels, a hood scoop and the familiar running pony on the grille.

As part of the Creator series, Lego includes a variety of extra parts that allow you to customize the 1967 Mustang GT. You can build it to a standard stock look, but in addition to the aforementioned nitrous bottle, builders can add a large rear duckbill-type spoiler, a front chin spoiler, headers that extend out from under the front fenders and a supercharger that sticks up through the hood. You can even adjust the rear suspension to lift the back end, giving it more of a classic drag racer look.

Finally, there are several different license plates, including Michigan, California and several other countries that I cannot identify.

This new Lego Creator Ford Mustang goes on sale on the company website on March 1st, 2019, with a price of $149.99. We have included a few images above, but you can click here to check out many more, detailed pictures on the Lego website.