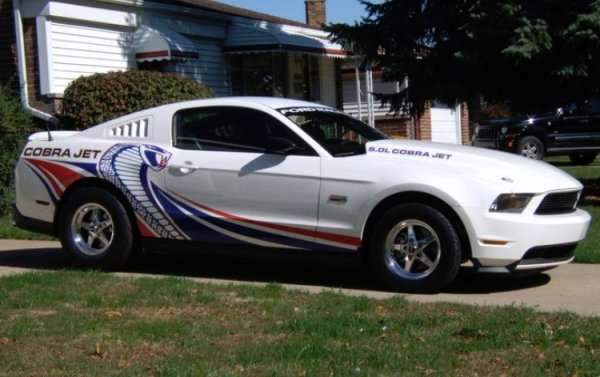 The Ford Mustang Cobra Jet is the quickest factory built pony car of all time and while the limited edition Cobra Jet Mustangs were not legal for street use, the ultimate Mustang lover has a chance to own a 1 of 1 Cobra Jet that offers the same performance of the race cars – while also being legal for road use.
Advertisement

Over the past few years, Ford Racing has offered a limited number of factory built Ford Mustang Cobra Jet drag cars. These modern Cobra Jets are the quickest factory production Mustangs ever, but there are a few downsides. First, with a price close to $100k, they are incredibly expensive. Second, with only 50 units made for each model year, they are hard to get ahold of without the proper connections. Finally, they come with a serial number rather than a proper VIN – which means that they are 100% not legal for street use.

However, thanks to a hardcore Detroit based Ford Mustang fan, you can buy a Ford Mustang that has the looks and the performance of the Ford Racing Cobra Jet while still being fully legal for daily road use.

The 1 of 1 Street Legal Mustang Cobra Jet
When Bill Barnes bought his brand new white 2011 Ford Mustang GT a few years back, it looked very much like every other 2011 Mustang GT. However, Bill had a plan for his new pony car that would make it one of the most unique customized modern Mustangs in the country. You see, Bill is an active drag racer and while he loved the look of the modern Cobra Jet drag racing package, he wanted a car that he could drive anywhere he wanted…while still packing the monster performance of the Cobra Jet.
Bill is quick to point out that his 2011 Mustang Cobra Jet is a “clone” and, technically, he is right. Since this wasn’t a factory production Cobra Jet, it is a 2011 Mustang GT Cobra Jet Clone, but it is one of the most accurate “clones” I have seen of any car. Calling something a clone has a negative connotation, but there is nothing negative to say about Bill Barnes’ custom Cobra Jet Mustang GT. On the outside, Bill’s 2011 Mustang GT Cobra Jet wears the same unique design features as the race only Ford Racing Cobra Jet. This includes the fiberglass hood with a raised cowl, the rear Cobra Jet faux gas cap, the Cobra Jet grille and badging, the prominent Cobra Jet decal package and the flush mount side window louvers – all of which came from Ford/Ford Racing. The only real difference in the exterior appearance of Bill’s street legal Cobra Jet and the actual race only Ford Racing Cobra Jet Mustang is the street legal wheel/tire package…and his LEGALCJ license plate. I have seen Bill driving this car around the Metro Detroit area more than once and in both the look and sound – you would swear that someone was just out for a cruise in their race-only Cobra Jet…except it has a license plate.

On the inside, a set of NGR lightweight seats and a roll cage provide the race ready look (while also being NHRA approved to run in the 9s).

While this 2011 Ford Mustang GT looks the part of the Cobra Jet – the drivetrain is the most impressive aspect of this street legal beast. Unlike the Cobra Jet from Ford Racing that relied on a 5.4L engine, Bill’s Cobra Jet uses the same 5.0L V8 that powers all of the newer Mustang GT road cars...except this engine has been fully built from the bottom up and topped by a 2.3L Ford Racing supercharger. When combined with the extensive list of suspension and transmission modifications, Bill’s Cobra Jet Mustang was able to turn in an average time of 10.55 on the Hot Rod Drag Week tour. If you aren’t familiar with Drag Week, it requires the competitors to drive to five different tracks, making quarter mile passes at each stop with the car in the same basic form as when it is driving on the street. Bill drove his Cobra Jet to five different tracks along the east coast and in 100 degree weather, his Legal CJ averaged 10.55 seconds in the quarter mile. It should also be noted that with Bill’s previous supercharger setup, his Mustang turned in a best time of 10.11 in better conditions and with the new supercharger adding 120-140 rear wheel horsepower – which Bill believes would allow the car to run well into the 9s in good conditions.

Again, this is a fully street legal 2011 Mustang that you can drive to the track and when you get there, you can expect to run 10s and maybe crack into the 9s on 93 octane gasoline.
Yes, it is awesome.

You Can Buy Bill’s Street Legal Cobra Jet
Bill Barnes got a whole lot of attention around the performance world with his 2011 Ford Mustang GT turned street legal Cobra Jet, including an appearance on the drag racing TV game show Passtime. Today, I am talking about Bill’s Mustang because it is for sale. How much will it cost you to have a street legal, 9 second Ford Mustang Cobra Jet? Well, if you are buying Bill’s Cobra Jet, it will cost you $43,700 (or best offer). To some, this sounds like a lot of money for a 2011 Mustang, but when you consider the fact that the actual Cobra Jet Mustang starts at almost $100,000 and you cant drive that on the street, this car is a smokin’ deal. Even if you put aside the cool Cobra Jet look of this monster Mustang, the fact that is a ready to run, professionally built 9 second drag car that is reliable enough to endure the rigors of the Hot Rod Drag Week tour makes it well worth that price tag.

If you want to get into a gorgeous 9 second Ford Mustang that will turn heads at the car show and at the track, click here to check out Bill’s full listing for his Street Legal Cobra Jet. There is a full mod list that will blow your mind while also further showing why this car is worth every cent of the asking price.

Fred wrote on August 25, 2014 - 1:17pm Permalink
The title of this article is totally misleading. The car is not a 1 of 1. And its NOT a Cobra Jet.
Patrick Rall wrote on August 25, 2014 - 8:35pm Permalink
I state very clearly what this car is...and if it not 1 of 1, feel free to post a link to another one. It is a 2011 Mustang GT with all of the major components of the FR500CJ with the exception of the race purposed drivetrain. I have never seen any proof of another like it...and that would make it 1 of 1.
Fred wrote on August 25, 2014 - 9:58pm Permalink
In order to be a so called one of anything it HAS TO BE FACTORY BUILT. You cant claim exclusivity to things you make up in your garage.
Patrick Rall wrote on August 26, 2014 - 9:29am Permalink
That isnt true at all. There are plenty of custom cars in the world that are 1 of 1. By the way, still waiting on another example of a street legal cobra jet build. Feel free to include a link to the rules of cars where it says that anything rare or unique has to be factory built to matter.
Fred wrote on August 26, 2014 - 1:39pm Permalink
Rare applies to FACTORY BUILT CARS. The owner is not an OEM builder, he is a guy that built a car using parts from the dealer. That doesnt make it anything other than a Mustang GT with added parts. Its not rare, anyone can make one. Exclusivity comes with a certain number of factory built cars, like the REAL Cobra Jets. That gives them value. This car has no more value than a built Mustang GT. The Cobra Jet parts do not add one cent of value to it or make it "Rare".
Patrick Rall wrote on August 27, 2014 - 9:51am Permalink
If you say so. The fact that you dont believe that any of the Cobra Jet parts add value to the car shows that you are probably better off arguing about something like the best low rolling resistance tire for the Prius. Oh, and we are all still waiting on those links.
blake wrote on August 27, 2014 - 11:37am Permalink
I'm on Patricks side on this. Do you consider Thunderbolts which made a trip to Dearborn Steel Tubing Co. for extensive body modifications and Boss 429's which were similarly modified to be "factory"?
Patrick Rall wrote on August 28, 2014 - 10:13am Permalink
Notice...never in the article above did i say that it was a factory built Cobra Jet...and I did specify that it was a clone.
steve wrote on August 28, 2014 - 11:52pm Permalink
If clones ... even the best ...with better parts and performance than the originals had value all of the excellent Cobra kit cars would be worth more than 10% of authentic Cobras. They may look like ducks and quack like ducks - but they aren't ducks. Drive them for fun not investment. And investment cars aren't for driving anyway. And certainly not for racing - unless you are rich enough to break a priceless car.
Elizabeth wrote on January 1, 2017 - 4:22pm Permalink
I know your comments are old, but they are still out there. I was watching Mecum, because I love cars, and they said that Cobra Jets could never be street licensed. I wanted to find out why and stumbled on to your commentary with each other. Besides the fact that they don't have VIN and they are expensive, why are they not street approved. I hope one of you can enlighten a total novice with a little of your knowledge.