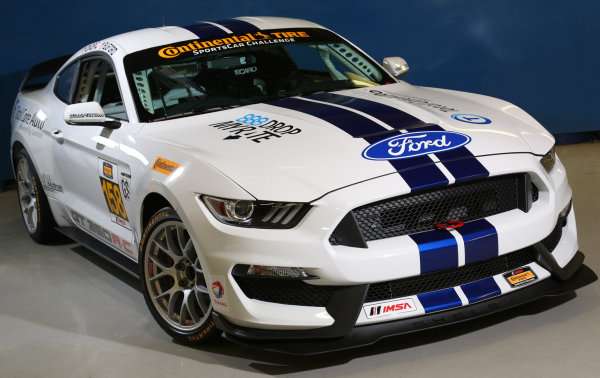 This morning, Ford Motor Company offered up the first bit of information on the 2015 Ford Shelby GT350R-C Mustang race car, which will make its on-track debut this weekend at Watkins Glen in the Continental Tire SportsCar Challenge.
Advertisement

Earlier this week, we brought you a look at a new Ford Shelby GT350S Mustang race car as imagined by the folks at TopSpeed and today, we have an official glimpse at the first 2015 Mustang-based race car. However, it isn’t quite as TopSpeed imagined, as this race car is intended for the Continental Tire SportsCar Challenge rather than the Pirelli World Challenge – meaning that the exterior design is slightly less extreme. Mind you, that isn’t a bad thing, as the basic design of the road-going Shelby GT350R is so well engineered for high performance that the GT350R-C race car looks a great deal like the road car.

“Ford is committed to the Continental Tire SportsCar Challenge and we’re very happy to be campaigning its product here,” said Larry Holt, team principal, Multimatic Motorsports. “We like the endurance format, and the racing is always intense. Strategy plays a big role; the cars must be fast and reliable, and there are always at least 10 contenders running door-to-door for two and a half hours. It is the perfect home for the GT350R-C.”

Now, before getting into the details, I want to point out that I am aware that there are NASCAR race cars that are designed after the 2015 Mustang, but this is the first production-based race car based on the new generation Mustang.

GT350R-C Design
The key difference between the Ford Shelby GT350R-C Mustang race car and the rendering from TopSpeed is that the real thing is actually a great deal less extreme than expected, but this car is also intended for a different racing series than the TopSpeed GT350S. Should the new Mustang run in the Pirelli series, it will likely have more prominent aero bits including a huge rear spoiler and a much larger front splitter – but for the Continental series, the GT350R-C will sport what appears to be the same design as the GT350R road car.

While the wheels are obviously different and there is a tow hook sticking through the upper grille, the GT350R-C race car looks pretty much identical to the GT350R. The rear wing appears to be the same, as does the vented hood, the Shelby-branded front splitter and the front grille openings.

"Like so many Mustangs before it, the Shelby GT350R is a car born to race,” said Dave Pericak, director, Global Ford Performance. “We’re taking it to the track as the GT350R-C and we’re ready to see what it can do against the best competition in the world.”

On the inside, the new Ford Shelby GT350R-C race car departs from the street-friendly layout of the GT350R, instead opting for a cockpit that has just the essentials, including a roll cage and all of the other safety bits required to go racing in this series.

GT350R-C Mechanical Features
Like the rest of the 2015/2016 Shelby GT350 lineup, the new GT350R-C race car is powered by a 5.2L flat plane V8, but Ford has not offered any details as to the power output of this Mustang racer. Ford has also not announced that the GT350R-C will use for a transmission, but we would expect a sequential race-duty gearbox similar to what is found in the current Boss 302R race car competing in the Continental series.

We do now that the new Shelby GT350R-C Mustang will use an adapted version of the street car’s four wheel independent suspension setup which, when combined with the high performance flat plane V8, could make this new Mustang race car a formidable opponent in the series.

First Race, This Weekend
The new Ford Shelby GT350R-C Mustang race car will make its on-track debut this weekend as the Continental Tire Sports Car Challenge heads to Watkins Glen in New York. The #158 Mustang shown above belongs to the Canadian team Multimatic Motorsports and this team fields two cars in the Grand Sport division of the series. This team has had a solid 2015 racing season, but they trail the class-leading Camaros campaigned by Stevenson Motorsports.

Watkins Glen will be the first test as to how well the new Shelby GT350R-C Mustang can compete with GM’s road racing Camaros, but the new Mustangs will also need to beat the best from Porsche, Nissan and BMW.

SooHooSama wrote on June 24, 2015 - 6:14pm Permalink
No need to show us a picture here. We'll have plenty of time to see it while it's broken down in its pit box.
Michael wrote on June 25, 2015 - 7:33am Permalink
Unlike other automakers track cars the Ford Mustang doesn't need a lot of scopes and wings for it to run around the track. That is just a part of the Mustang's breed, direct from the factory.