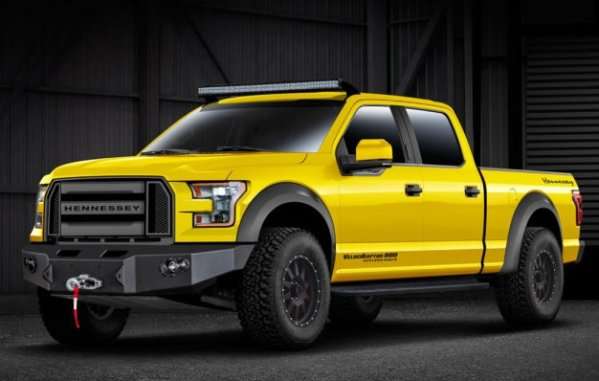 The folks at Hennessey Performance have offered up their first take on the new 2015 Ford F150 pickup and with more than 600 horsepower, the 2015 Hennessey VelociRaptor 600 should be a perfect follow-up to the super tuned SVT Raptor pickups from the last generation F150.
Advertisement

A few years back, Texas based tuned Hennessey Performance rolled out their VelociRaptor 600 – a high performance pickup based on the Ford SVT Raptor F150. While rumors suggest that a new Raptor will debut in the Ford display at the upcoming 2015 Detroit Auto Show, the folks at Hennessey couldn’t wait to work their magic on the new 2015 F150 so the Texas tuned has offered up their newest VelociRaptor based on the 2015 F150 FX4.

The 2015 Hennessey F150 VelociRaptor 600
Unlike the previous VelociRaptor that was based on the Ford SVT Raptor F150, the 2015 Hennessey high performance pickup is based on the 2015 Ford F150 FX4 SuperCrew. Unlike the previous generation VelociRaptor which called upon the 6.2L SVT V8 to make big power, the 2015 version uses the new version of the 5.0L V8. In standard form, the 2015 F150 with the 5.0L V8 offers 385 horsepower, but the folks at Hennessey have added a roots style supercharger, larger fuel injectors, a custom engine management system and a freer flowing stainless steel exhaust system to increase the output to over 600 horsepower. Hennessey hasn’t stated exactly how far over 600 horsepower, but 600+ is a good enough figure for me.

In addition to the engine modifications, the 2015 Hennessey VelociRaptor 600 comes with a set of 33 inch BF Goodrich tires mounted on unique Hennessey 17 inch wheels, but those buyers who want a whole lot more from their new super tuned F150 can opt for upgrades like a custom offroad suspension setup, Brembo brakes, unique off road bumpers and much more.

"The 2015 VelociRaptor 600 will offer the best of both worlds for our clients," says Hennessey partner, Don Goldman. "Many of our VelociRaptor owners use their trucks to drive to work or to take the kids to school. However, when the going gets tough, the VelociRaptor is highly capable in inclement weather and off-road conditions."

The 2015 VelociRaptor is Pricey, but Not Too Pricey
The closest thing to bad news with the 2015 Hennessey VelociRaptor 600 is the price tag, as starting at $73,500 puts it out of reach of many new F150 buyers. There is no question that $73k+ is a big chunk of change, but it should be noted that this base price includes the 2015 Ford F150 with the FX4 package. On the Ford.com website, the least expensive 2015 F150 SuperCrew with the 5.0L V8, four wheel drive and the FX4 package starts around $41,000 and that is for an XL package. I would imagine that the 2015 VelociRaptor 600 has more bells and buzzers than what you get with the XL trimline, so the price of the donor truck is likely to start higher into the $40k range, so the engine upgrades, the wheel/tire package and the other details of the basic VelociRaptor 600 package costs somewhere in the area of $25-30k, but for a 600+ horsepower pickup that can still serve as a daily driver – that really isn’t all that much money in the long run.