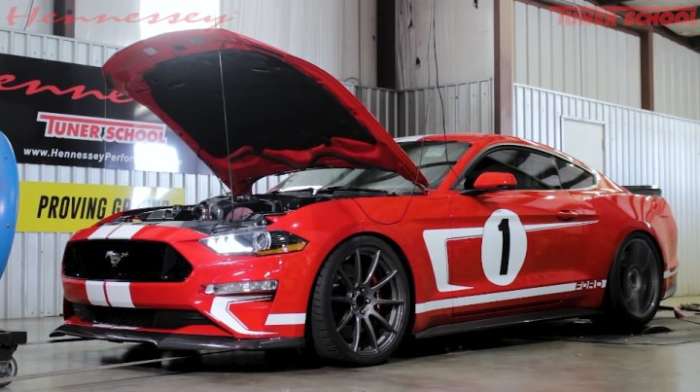 The recently-announced Hennessey Heritage Edition Ford packs an advertised 808 horsepower and 677 lb-ft of torque at the flywheel, but to find out how much power this supercharged pony car makes at the wheels, the Texas tuner strapped one to the dyno – with results that are a little lower than you would expect.
Advertisement

Before getting into the dyno numbers for the 2019 Ford Mustang GT Hennessey Heritage Edition, I want to point out that every dynamometer is different and these numbers should always be taken with a grain of salt. This same car could have made much more power on that same day on a different dyno and on a different day, this same car could make different power on this dyno. Air condition plays a big role in dyno numbers, as does the calibration of the given dyno, so numbers vary widely.

That being said, the Hennessey Heritage Edition Mustang GT made less power than many people would have expected.

Hennessey Mustang on the Rollers
In the video below, the 2019 Ford Mustang GT with the Hennessey Heritage Edition package – one of just 19 slated for production – makes a run on the dyno. We get to watch the run from a few different angles, giving us a chance to hear the car roar from the different perspectives. After seeing the run from different camera views, including one showing the high tech gauge cluster, we see the dyno sheet.

This supercharged Mustang laid down 673.63 horsepower and 526.56 lb-ft of torque at the rear wheels. Those numbers lead to drivetrain loss figures of 16.6% for horsepower and 22.2% for torque, both of which are higher than the average figures for most modern performance cars. At the same time, those figures make the Hennessey Mustang far more powerful than any factory-built Ford performance car while being just as powerful as many of the most popular tuner packages on the market today.

Again, only 19 examples of the 2019 Ford Mustang GT Hennessey Heritage Edition will be built and the price of each will start at $89,950. At $90k, this package is roughly $50k more than a standard Mustang GT, so it isn’t what we would call a bang-for-the-buck performance car, but for those people who want a rare, high performance pony car – this might be a good fit in the garage.

LG's New EV Battery Plant Is a Welcome News for Tesla
Tesla Giga Berlin's New Hurdle: It's Not Only the Gov't, but Now Tesla Itself
END_OF_DOCUMENT_TOKEN_TO_BE_REPLACED