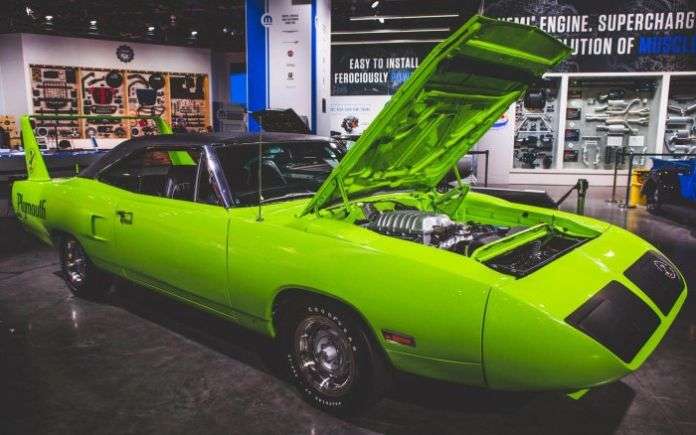 The Hellcat-powered Plymouth Superbird at the 2017 SEMA Show is one of the coolest super-sleeper Mopar muscle cars ever, combining what is likely the most famous classic Chrysler Group vehicle with one of the most popular Chrysler Group engines ever.
Advertisement

The biggest news from the huge Mopar display at the 2017 SEMA Show is the new Hellcat Hemi crate engine. To showcase the most powerful crate engine that Mopar has ever offered, the automaker commissioned a well-known customizer to build a vehicle powered by the plug-n-play Hellcat Hemi. Mopar picked Mark Worman from the Velocity channel’s show Graveyard Cars, who is best known for building gorgeous Mopar muscle cars – often from rusted piles of mangled metal.

The result is a Plymouth Superbird powered by the Hellcat Hemi, combining a classic legend with a modern legend.

The Hellcat-Powered Superbird
In order to grab the most attention, Mopar and Worman chose the 1970 Plymouth Superbird, which is arguably one of the most famous classic Mopar muscle cars. With the massive wing, the lineup of powerful engines and NASCAR dominance, the Superbird is one of Ma Mopar’s greatest performance cars of all time.

After they picked the vehicle, the project began to install the 707 horsepower Hellcat Hemi crate engine. Worman’s team used the Mopar Hellcat Hemi Engine Kit and the Mopar Front End Accessory Drive kit for complete plug-n-play functionality with the supercharged 6.2L Hemi. All of that blown power is sent to the rear wheels by means of a 6-speed Tremec manual transmission, preserving the gear-banging excitement of the classic muscle car – just with one of the most powerful modern Mopar engines under the hood.

During the interview with Mark Worman at SEMA, which led to the formal introduction of the Hellcat-powered Plymouth Superbird, the star of the Velocity channel show pointed out two interesting points about this project. First, the supercharged Hellcat Hemi didn’t fit under the stock hood, but they wanted to preserve the factory look, so the build team had to lower the engine mounting points so make room on top for the supercharger. Also, and more importantly, it was pointed out that the Hellcat Hemi weighs a little less than the 426 cubic inch Hemi which served as the most powerful engine option in the 1970 Superbird.

Figure that a stock 1970 Plymouth Superbird with the 426 cubic inch, 425 horsepower Hemi weighed around 3,800lbs, leading to a power-to-weight ratio of 8.94 pounds per horsepower. We don’t know the exact weight of this custom Superbird, but if the modern drivetrain cuts just 100 pounds, this car has 707 horsepower and a 3,700lb curb weight – leading to a power-to-weight ratio of just 5.23 pounds per horsepower.

In other words, if this 1970 Superbird can get traction, it is likely incredibly fast – although those skinny tires out back make me question whether this car can do anything but roast the tires. In any case, it is a beautiful car and I love it.

With the hood closed, it looks like a flawless 1970 Plymouth Superbird and when the hood opens, you learn that is packs Mopar’s most powerful full-production engine.

No Superbirds were Harmed
Before any hardcore Mopar fans head to the comment section to complain about the Graveyard Cars team cutting up one of the rare 1970 Plymouth Superbirds – rest easy, as this is a clone. The team began with a low-line Plymouth Roadrunner and they transformed it into a Superbird, with all of correct items inside and out. The creation of this stunning Superbird clone allowed Mopar to feature the Hellcat Hemi crate engine and the supporting accessory kits without devaluing one of the most famous Mopar muscle cars of all time.