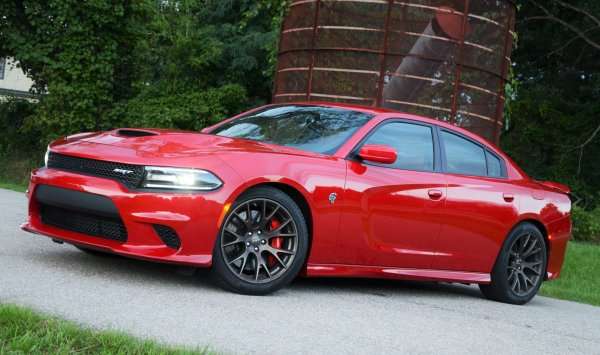 Yesterday we reported that the Dodge Charger SRT Hellcat had turned the quickest lap among 4-door cars in their years Car & Driver Lightning Lap shootout and after digging deeper into the results of one of the most rigorous track tests in the industry, I found that the Tesla Model S P85D was also in the competition – and it didn’t do very well at all.
Advertisement

One of my friends sent me an email yesterday morning with the some of the results of the 2016 Lightning Lap from the October 2016 issue of Car & Driver, with a quick rundown of the top 19 finishers. Included in that list were the Dodge Viper ACR and the Hellcat Dodge Charger, which finished 1st and 14th, respectively, but he didn’t include the Tesla Model S P85D – presumably because the car did so poorly.

Fortunately, I ran out last night and purchased the October issue of Car & Driver and in reading the whole Lightning Lap piece, I learned more about the poor performance of the world’s highest performance electric vehicle.

Hellcat Charger in the 2016 Lightning Lap
Among cars with an internal combustion engine, the Dodge Charger SRT Hellcat is the most powerful, the quickest and the fastest 4-door sedan in the world. The Charger is capable of dashing form 0-60 in the mid 3-second range and 0-100 in the high 7 second range, running the quarter mile in the low 11 second range and reaching speeds well in excess of 200 miles per hour thanks to the supercharged Hellcat Hemi with 707 horsepower and 650lb-ft of torque.

While those numbers are all very impressive and they all play a big role in making the Hellcat Charger one of the most formidable factory drag cars sold in the USA, the 4,600lb sedan is often accused of being nothing more than a straight line machine. I have tested the 707hp sedan on a handful of different tracks now and I know very well that the Hellcat Charger handles far better than most people expect, but the 2016 Lightning Lap proves that point in black and white.

In Car & Driver’s tests, the Hellcat Charger made it around the Virginia International Raceway Grand West course in just 3:03.5 – making it the quickest car with 4 doors in this year’s competition. The 4,600lb Hellcat Charger beat the new Ford Focus RS, the new Lexus GS F and – most importantly – the Tesla Model S P85D.

After Tesla fans freaked out that Car & Driver didn’t include the Model S in last year’s Lightning Lap, the editors made sure to include it in this year’s shootout. The results were “as expected”…and the results were bad.

Early into the first hard lap with the Tesla Model S P85D, the big EV began to lose braking power after the first hard braking exercise. With the help of a fully charged battery, the Model S was able to reach impressive speeds on the first long high speed run, but just 40 seconds into the 3-minute lap, the car went into a reduced power mode. The steady flow of high end power had gotten the drivetrain too hot and the car went into a mode that protects the batteries.

Because of this overheating issue, the Tesla Model S P85D only mustered a lap time of 3:17.4, making it the slowest car in this year’s Lightning Lap by almost 10 seconds. The Model S was almost 14 seconds slower than the Hellcat Charger.

Tesla fans will surely insist that without the mechanical issues, the Model S would have stood a better chance of competing with the Hellcat Charger, but with the Tesla running into issues so early in the lap, it seems hard to imagine what would need to be done to keep the car cool enough for an entire hard lap. Of course, that is relying on the braking system surviving through slowing the 5,000+ pound sedan after the other long straights of VIR Grand West.

I will give credit where credit is due – the Tesla Model S P85D has proven to be a beast in the quarter mile when well driven, but based on the Car & Driver Lightning Lap results, the road course is not an ideal setting for the world’s highest performance electric sedan.

I don’t know that I have ever said this before in an article, but I recommend that everyone who is interested in the Lighting Lap buy the October 2016 issue of Car & Driver. This year’s LL has one of the best spreads of vehicles, topped by the Dodge Viper ACR. If you are a Mopar collector, this Car & Driver will likely be the last time we see the Viper winning the Lightning Lap for a while.

Timmy wrote on September 14, 2016 - 1:42am Permalink
Isn't the P85D one or two "revisions" behind the times? i.e., Tesla's best Model S went first to 90, and now their best/quickest/fastest is the P100D in Ludicrous mode (0-60 in 2.5 seconds). Run the times and races again with the "100", rewrite the article, and I'll pay attention. Of course, by then, Tesla may have improved their best yet again.
Alexander wrote on September 14, 2016 - 8:15am Permalink
They still have not solved the underlying issue of overheating electrical components when driven hard for more than a minute at a time. They achieve amazing things over short periods by shoving way more electric current through the components than they are rated for, but as per laws of thermodynamics, these materials will melt under continued temperature stress. They will have to build out of different materials to make a huge difference (superconductors anyone?)
Timmy wrote on September 14, 2016 - 5:41pm Permalink
If it were important to Tesla that their luxury sedan, which is the quickest 0-60 production vehicle in the world (of any class), also be a track/racing car, I'm confident that they could engineer/improve the TMS to keep everything cool enough. It's just not that important (at this time, anyway). Note who won this year's Pike's Peak race (production car division), regardless! RIP ICE, and not a moment too soon!
Chooch wrote on September 24, 2016 - 2:20am Permalink
Who are we noting that won the Pike's Peak Hill Climb? Certainly not the Tesla Model S which earned the 64th spot, but it was the only "Electric Production" car to finish the Race, so it got 1st out of 1 for the production electric car category. Fastest production car to win the Pike's Peak Hill Climb was the Acura NSX followed by 2 dodge Vipers' one was an ACR. If racing was not that important than why is Tesla involved in the Electric GT race series involving modified Model S;s.....Modified Model S for racing, somebody cares.
AZDry Heat wrote on September 14, 2016 - 8:54pm Permalink
Takes much more than a minute of hard driving to have heating issues, at least for my car (P90DL). Even in 100+ temps, I have never had a heating issue. Not sure how long it takes, but I am overheated before the car is.
Greg Christy wrote on September 14, 2016 - 8:23am Permalink
If the Charger had all wheel drive it would beat the Tesla easily. Traction is its limiting factor.
AZDry Heat wrote on September 14, 2016 - 2:06pm Permalink
Obviously this Telsa should not have had battery problems so the article is misleading. A properly operating P90DL would have much better results. If the Hellcat had a flat tire, would Mopar fans concede the Hellcat got trounced?
Steve Matsukawa wrote on September 28, 2016 - 11:21am Permalink
The Hellcat Charger won, period, end of story. No if ands or buts.