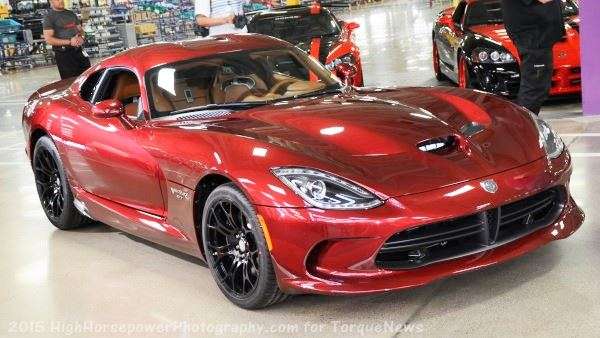 Dodge Viper sales are relatively flat and while the company is focused on the massive popularity of the Hellcat Challenger and Charger, the sales success of the automatic transmission in the Challenger Hellcat and the entire Corvette lineup makes it very clear what Dodge needs to do to sell more Vipers – with the lightning quick 8-speed transmission.
Advertisement

Why an Automatic Transmission?
While there are plenty of people on the road driving cars that would struggle to run a 14 second quarter mile who will insist that every high performance car should only be offered with a proper manual transmission, the fact of the matter is that the advancements in automatic transmission technology allows owners to have a car that shifts itself without hindering performance. No longer is an automatic always a “slush box” and two great examples are the 8-speed automatics offered in the Dodge Challenger Hellcat, the Chevrolet Corvette Stingray and the Chevrolet Corvette Z06. Heck, Ferrari and Lamborghini currently don’t offer a manual transmission, so it is hard to fault Chrysler or GM for popularizing their new 8-speed autos in the Challenger and Corvette.

In other words, the Dodge Viper’s biggest competitor has enjoyed great sales success with the automatic transmission, as has the mighty muscle car with which the Viper shares a showroom.

Not only would the introduction of the 8-speed automatic in the Dodge Viper improve sales, but it would likely also include performance numbers. Considering that the Hellcat Challenger is quicker with the automatic transmission, the Viper would almost surely enjoy those same advantages when equipped with the same 8-speed gearbox.

However, once the demand for the Hellcat cars has slowed a bit, introducing the quick-shifting automatic in the Viper could play a massive role in improving sales. Even if the company only sees a similar level of interest to the ratio of the Corvette Z06, sales of the Viper could double…if not increasing by more than two times.

jeff wrote on September 28, 2015 - 4:08pm Permalink
I'm sure bringing back a drop-top version of the Viper would also help sales
Tindddkia wrote on September 29, 2015 - 1:57pm Permalink
This article thinks an auto will make he viper sell as well as the z06.... look at how many manuel 7 speed z06s are being sold.... far more than the viper.... maybe the issue is not the transmission but the price for a Gts and a few options you're lookimg at well over 130,000 usd the srt at 89k or so is simply to un refined for that price.
Monty wrote on October 2, 2015 - 11:47pm Permalink
First of all the 8 speed automatic currently offered by Chrysler does not fit in the viper. Second - the viper is a track car where a standard transmission has advantages over an automatic and is preferred by many expert drivers. If you just want to step on the gas, wastefully burn rubber, and go in a straight line, the viper is not the car for you anyway. Third - Dodge knows many Viper owners like to upgrade the already super engine, for instance with the new Arrow Racing supercharger that with a mild boost puts out 900hp and 900ft/lbs, which will shred the current automatic transmission. Fourth - viper owners prefer exclusivity and not one everywhere you look like the vette.
Charles e sands... wrote on November 3, 2015 - 6:13am Permalink
Need manufacture news Need new suppliers Bob

LG's New EV Battery Plant Is a Welcome News for Tesla
Tesla Giga Berlin's New Hurdle: It's Not Only the Gov't, but Now Tesla Itself
END_OF_DOCUMENT_TOKEN_TO_BE_REPLACED