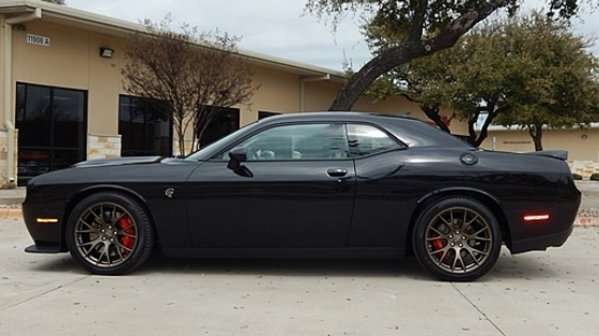 There were two examples of the 2015 Dodge Challenger SRT Hellcat available at this weekend’s Mecum collector’s car auction in Houston, with one selling for $80,000 and the other selling for $110,000 – both of which are considerably higher prices than MSRP.
Advertisement

NASCAR team owner Rick Hendrick paid $825,000 for the rights to own the very first 2015 Dodge Challenger SRT Hellcat, which came in a unique color and it was Hellcat VIN #1, making it an instant collectable. This past weekend, two of the 707 horsepower muscle cars rolled onto the Mecum auction block in Houston and while there were no extraordinary aspects to these particular Dodge Challengers aside from the supercharged Hemi, both cars sold for way over MSRP.

The first 2015 Dodge Challenger SRT Hellcat to his the Mecum Houston auction block was the beautiful black beast shown above. It was equipped with the 6-speed manual transmission, Phantom Black paint, Brass Monkey wheels, red seat belts on black leather seats and all of the standard features, including the plastic bags on the seats, the factory build sheet and the owner’s welcome packet. This car had the window sticker included as well, with an MSRP of just over $63k and with only 11 miles on the odometer, this car is pretty much factory fresh. This Challenger Hellcat sold for $110,000.

The second Hellcat SRT Challenger to hit the block was rolled out on Saturday. Unfortunately, there is far less information on the Sublime Green Dodge muscle car, but we know that it had the 8-speed automatic transmission and the heated/ventilated front seats. There is no mention of odometer mileage, which leads me to believe that it is not an extremely low number, so this car could have been sold as what we would all consider a used vehicle. Even with that in mind, the bright green 707hp Mopar muscle car sold for $80,000.

In speaking with some of my Dodge dealership connections, it seems that the big push to buy a 2015 Hellcat Challenger had faded a touch. There are still cars sitting on lots around the country with high dealership markups and in all reality, the person who paid $110,000 could have likely found a comparable car at a dealership for less money. While I have seen some dealerships marking the cars up as much as $25,000, even a $25k markup only brings a fully loaded Hellcat Challenger into the high $80k range. This means that the winner of the black 707hp Challenger paid a solid $20g more than dealerships are asking – which goes to very clearly show why dealerships can get away with adding markups to the MSRP.

The 2015 Challenger Hellcat in Sublime that sold for $80,000 still had a big jump over the MSRP, but the buyer of the green car likely paid less than he or she might have at a dealership asking for a big markup. Of course, the buyers of these cars could have waited and gotten one at much closer to MSRP, but at this point, that wait could be a year or more. So if you want a Hellcat Challenger right away and you have an extra $100,000 laying around, it looks like one of the high profile collector’s car auctions could be your solution.

At the same time, if you have $100,000 laying around and you want to buy a high performance American car, the Dodge Viper can likely be hard for far less with a little shopping.

RICK DEMERS wrote on April 14, 2015 - 6:59pm Permalink
I HAVE THE FIRST HELLCAT BUILT FOR CANADIAN RETAIL! IS IT WORTH MORE BECAUSE OF THAT? THANK YOU RICK