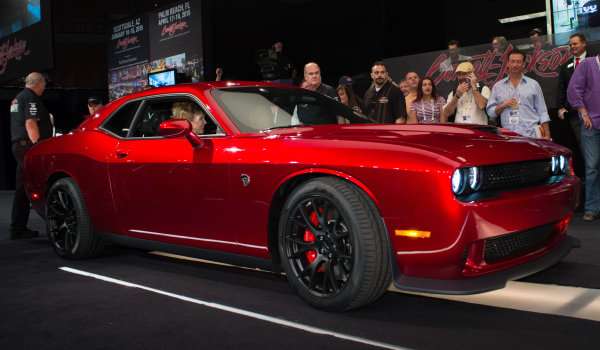 This past weekend saw the auction of 2015 Dodge Challenger SRT Hellcat #1 and NASCAR team owner Rick Hendrick made the winning bid of $825k, which a charitable organization matched to raise the total charitable contribution from the Hellcat sale to $1.65 million – more than has been contributed by any other single car in Barrett Jackson history.
Advertisement

It has become very common for the first production example of hot car like the 2015 Dodge Challenger SRT Hellcat to be auctioned off for charity. Over the past few years, pretty much every new American performance car to hit the market has headed to a major collector’s car auction with the proceeds going to charity so It came as no surprised to learn that - like the Chevrolet Corvette Stingray, the new 2015 Ford Mustang and the newest generation SRT Viper - Hellcat Challenger #1 would be auctioned off by the folks from Barrett Jackson.

This past weekend, 2015 Dodge Challenger SRT Hellcat #0001 rolled onto the stage of the Barrett Jackson auto auction in Las Vegas and when the final gavel sounded, the very first 707hp muscle car was sold for a whopping $825,000. NASCAR team owner, well known car collector and well known GM guy Rick Hendrick placed the winning bid and the Engelstad Family Foundation matched that bid. With that additional $825,000, the first production unit of the Hellcat Challenger raised $1.65 million dollars for the Opportunity Charity. That is the largest contribution from a single car in the history of the Barrett Jackson collector car auctions and the benefactor of that large contribution is the Opportunity Village charity group – which helps support individuals with intellectual disabilities.

2015 Dodge Challenger SRT Hellcat VIN #0001
The Dodge Challenger SRT Hellcat is the most powerful American production car of all time so the simple fact that this is the very first for-sale unit of the most powerful American production car ever makes it a special car. That alone is reason enough for Hellcat Challenger VIN #0001 to be a hot item at a big collector’s car auction, but the Chrysler Group wanted to take some measures to make it even more unique. To do so, they painted the first production unit of the Hellcat Challenger a stunning Stryker Red – a color which is not offered on anything other than the Dodge Viper. Hellcat Challenger #1 also has a unique orange painted engine cover and a special owner’s package. This package includes a HEMI Orange painted base presentation box with an electronic vehicle build book and a video documentary on an iPad mini along with still shots, vehicle footage, a customized key fob holder, an authentic Dodge Challenger SRT Hellcat embossed Laguna Leather iPad sleeve, a SRT Hellcat lithograph and a “birth certificate” for VIN0001.

“The $1.65 million raised by auctioning this one-of-one Dodge Challenger Hellcat at this year’s Barrett-Jackson auction means the most powerful muscle car ever will also have a very powerful impact on the people who benefit from the services of Opportunity Village,” said Tim Kuniskis, President and CEO, Dodge and SRT Brands, Chrysler Group LLC. “The VIN0001 muscle car was not only one of the hottest cars that rolled through the Barrett-Jackson auction lanes, it is also the ultimate collectible 2015 Dodge Challenger as Dodge is ensuring there will never be another one like it.”

Even a GM Guy Knows a Great Muscle Car
While it came as no surprise that the first production unit of the 2015 Dodge Challenger SRT Hellcat went to the auction, the winning bidder does come as a bit of a surprise. We figured that some well-known car collector would pay top dollar for the rights to own the first copy of the most powerful American production car ever, but it came as a surprise to some that Rick Hendrick bought the first Hellcat Challenger.

Hendrick has made a name for himself by being one of the most (if not the most) successful team owners in NASCAR history and throughout his championship years racing stock cars, his teams have fielded General Motors vehicles. Hendrick Motorsports is one of the biggest names in American motorsports and when you think about a Hendrick team car – you think about a Chevy race car.

More recently, Rick Hendrick has made a name for himself in the world of collector’s car auctions, as he has shown that he is always happy to shell out big money for charity – and for the right to own a first example of a special car. For example, Hendrick has paid millions of dollars over the past few years to buy cars like the first 2014 Corvette Stingray Coupe, the first 2014 Corvette Stingray Convertible, the first 215 Corvette Z06 Coupe, a variety of first-unit Camaros and the very first Chevy Volt.

Ultimately, it comes as no surprise that Rick Hendrick the automotive philanthropist purchased the first Hellcat Challenger. It comes as a surprise that Chevy Motorsports guy Rick Hendrick bought the most powerful American production car ever from a company that isn’t General Motors. This just goes to show that even a guy who has made his multimillions with GM race cars can appreciate an awesome machine like the Hellcat Challenger.

The Charitable Impact
Most importantly, the Engelstad Family Foundation agreed to match Rick Hendrick’s $825,000 winning bid – bringing the total contribution to the Opportunity Village charity up to $1,650,000. This is more money contributed through the auction of a single car in all of the years that Barrett Jackson has been doing charity car auctions. This is fitting considering that the Hellcat Challenger is the most powerful and quickest American production car. Perhaps the vehicle that knocks the Hellcat off as the new most powerful American production car from Ford or GM will take a shot at the charitable contribution record as well, but for the time being the Hellcat Challenger is once again the king.