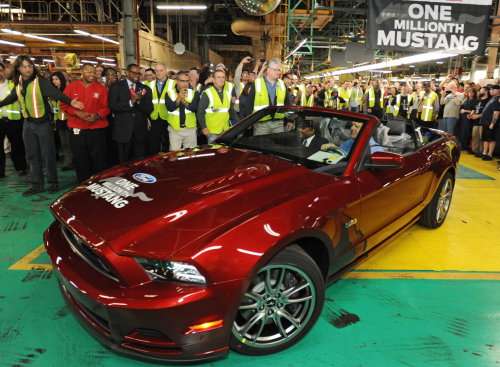 On April 17th 1964, the all-new Ford Mustang was introduced for the very first time at the New York World’s Fair and with today’s 49th birthday celebration – Ford Motor Company has announced that the 1,000,000th Mustang rolled off of the Flat Rock Assembly line 49 years to the day that the Mustang was introduced to the world.
Advertisement

There are few days in history that are more well known in the auto industry than April 17th 1964 as that was the day that the Ford Mustang was first introduced at the New York World’s Fair – and the Mustang set an incredible first-day-sales record of roughly 22,000 units after making its big debut with a total of 417,000 examples sold in the first year available. To reiterate, that was 417,000 Mustangs sold in the first year from the day that the car was first debuted and that my friends, is incredible. 49 years later the Mustang has become the longest-running car sold here in the United States. There has been a new Mustang model offered every year since 1964 while others took years off between models years (like the Chevrolet Corvette in 1983 and the Camaro 2003-2008). Although there were some years where the Mustang fell short of the level of performance offered by both the vintage and newest models, the Ford Mustang has risen to be the oldest car in America and one of the most recognizable cars in the world.

Over these past 49 years, Ford has sold over 8.5 million Mustangs with the best year coming in 1966 when Ford sold a whopping 607,568 copies of their high performance pony car. When you step back and really think about that number – 607,568 Ford Mustang coupes and convertibles in a single year – it is truly incredible. There was only one vehicle in the US market that moved over 500,000 units in 2012 and that was the Ford F Series pickup. The bestselling cars in America for 2012 was the Toyota Camry with 418,312 sedans sold so in 1966 – in a world where there were far fewer cars available – the mighty Mustang was literally everywhere. Compare that to recent numbers and you can see just how much the influx of foreign competition has combined with the changing auto industry to knock Mustang sales well away from where they once were. Ford sold just shy of 83,000 Mustangs in 2012 and over the last 49 years, sales have been bounced back and forth around the 100,000 mark with the stronger years climbing into the 250-300k range but has been many moons since Ford has sold that many Mustangs in a single year. Even with that drop, the Mustang has routinely been one of the best (if not the best) selling sports cars in America as it has become the oldest car nameplate in the industry.

“Mustang is one of the most beloved nameplates in the industry, with fans around the world and throughout Ford Motor Company,” said Nair. “The team here at Flat Rock Assembly has built an outstanding reputation for quality while producing one million Mustangs over the last nine years, and we expect that to continue for many years to come.” Conveniently, the Ford Mustang’s 49th birthday arrives on the same day that the Flat Rock Assembly Plant where the Mustang is built puts the finishing touches on the 1,000,000th Mustang built at the current facility. The Mustang moved production from the Rouge plant to Flat Rock for the 2005 model year for the launch of the S197 Mustang generation so over the course of the past 9 model years, Flat Rock has built roughly 111,000 Mustangs each year. The 1,000,000th Mustang built in Flat Rock is a fully loaded Mustang GT Premium Convertible finished in the gorgeous Ruby Red exterior paint and the wheels of the Brembo brake package (the high performance brakes are there too).

Ford had previously shared the Flat Rock facility with Mazda under the name AutoAlliance Plant but with Mazda’s struggles and eventual departure from the American production facility – Ford took full control and renamed the plant Flat Rock Assembly. With the absence of Mazda production, Ford has added a second shift and 1,400 new jobs as the company plans to use Flat Rock for overflow production of the popular new Fusion sedan. “Flat Rock has gone through an amazing transformation over the past year,” said Tim Young, plant manager, Flat Rock Assembly Plant. “We’ve invested $555 million including a state-of-the-art, fully flexible body shop and an upgraded paint shop to make sure we’re continuing to build the best of the best for the next one million Mustangs.”

Joe Eckstein wrote on April 25, 2013 - 1:58am Permalink
What is the total number of Mustangs built? There is even error on "Wikipedia" ... who knew? 1 Million at Flat Rock Plant is not the total manufactured of all time. If so, it is poorly written copy :-( Not to say that's remarkable ... just want to know the total!