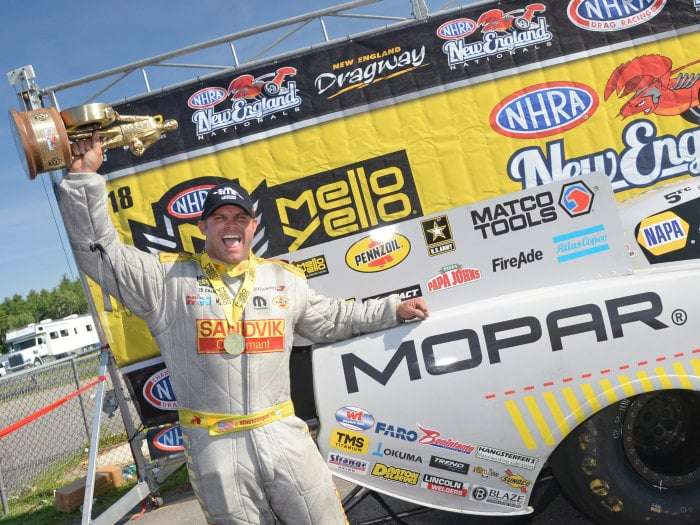 The Don Schumacher Racing Dodge Charger funny cars drivers didn’t get off to the same strong start in 2018 that they had in the past few years, but with Matt Hagan winning his second straight event this past weekend, DSR cars have now won three races in a row – breaking up the early season dominance of the John Force Racing Chevrolet Camaros.
Advertisement

This past weekend, the NHRA funny cars headed to New England Dragway for the 13th race of the 2018 championship season and for the second year in a row, Matt Hagan drove his Dodge Charger to the winner’s circle. Teammate Ron Capps also had a strong showing, making it to the semi-finals while the Camaro-driving rivals from John Force Racing (JFR) were all out of contention after the second round of eliminations.

Qualifying
Matt Hagan was fast out of the trailer, turning in the second-best time of the initial qualifying round, trailing only Robert Hight. The rest of the Don Schumacher Mopars were also fast early on, with Tommy Johnson Jr sitting 4th, Jack Beckman 5th and Ron Capps in 8th , while the other Camaro drivers – John Force and Courtney Force – were 3rd and 13th after this first run.

In the second round of qualifying, Hagan jumped to the top spot, Beckman moved to 2nd, Capps moved to 4th and Johnson dropped to 8th while Hight fell to 5th, John Force fell and 6th and Courtney moved up to 10th.

The positions from the second round would remain the same for all of the DSR and JFR cars except for Courtney Force, who ended up falling to 13th by the final round of qualifying. Dodge Charger funny cars occupied the 1st, 2nd, 4th and 8th spots while the Camaro funny cars were in the 5th and 6th spots and the final top-8 spot – 3rd – was held by Shawn Langdon in his Toyota Camry. The highest qualifying Ford Mustang was Tim Wilkerson in 10th.

Eliminations
In the first round of eliminations, all four of the Don Schumacher Racing Dodge Charger funny cars won, with Matt Hagan turning in the quickest run of the round. The biggest win of round #1 came from Ron Capps, who knocked off points-leader Courtney Force when her Camaro ran into problems on the big end.

In the second round, things didn’t go nearly as well for Don Schumacher Racing, as Hagan took the win over teammate Tommy Johnson Jr and Jack Beckman lost to Tim Wilkerson, but Ron Capps beat another John Force Racing Camaro – putting Robert Hight on the trailer early. Meanwhile, Shawn Langdon beat John Force, eliminating all three of the JFR Camaros before the semi-finals.

In the other half of the semi-finals, Tim Wilkerson drove around Shawn Langdon to put his Ford Mustang in the finals for the first time this season and the first time in almost a year.

This is Hagan’s second-straight win, his third on the year and the fifth win of 2018 for Don Schumacher Racing.

Championship Standings
After the 13th race of the 2018 season, Courtney Force still holds a commanding lead over Matt Hagan (-155) in 2nd, Jack Beckman (-222) in 3rd, Ron Capps (-235) in 4th and Robert Hight (-240) in 5th. With just five events left before the “Countdown to the Championship” six-race shootout, it will be interesting to see if anyone can catch Courtney Force, but with the Countdown portion essentially resetting the points for the top 10, it really doesn’t matter how far ahead she is once we hit the last six events of the season.