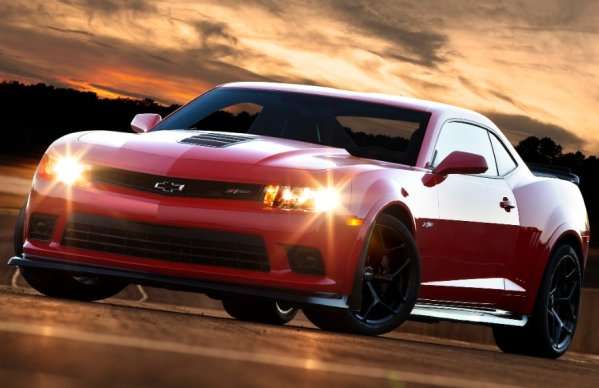 We reported a few weeks back that General Motors was going to make an effort to prevent people from “cloning” the new Chevrolet Camaro Z/28 by restricting the components that make the new Z/28 so unique and while the company will restrict the sale of some of those items in order to prevent people from making their own Z/28 at home – it looks like some of the components will be available to owners of other 5th gen Camaros.
Advertisement

The new Chevrolet Camaro Z/28 features components inside, outside and under the sheet metal to make it the most track capable Camaro of all time. The cabin has only the features that are required by law (no AC, only a one-speaker sound system) as to keep the weight down, the exterior features a collection of unique items from the “flowtie” badge in the grille to the aggressive aerodynamics package and the mechanical features of the new Z/28 are optimized in every way – from the 500+ horsepower LS7 V8 to the race spec suspension system to the incredible Brembo carbon ceramic braking package that was previously restricted to some of the most expensive cars in the world. The new Camaro Z/28 is incredible and it comes with an incredible price of $75,000 that will make it unreachable to many hopeful Camaro fans.

Because of that high price and limited availability, there is a good chance that some current 5th generation Camaro owners will attempt to turn their car into the closest rendition of the Z/28 as possible – but GM doesn’t want that to happen. To prevent that, GM will only allow people who own a new Z/28 or shops that are working on a new Z/28 to purchase the factory items…or so we were lead to believe last month. In actuality, General Motors has no problem with private owners modifying their current Camaro to perform like the Camaro Z/28 – they just wont make it easy to make your Camaro SS look like a new Z/28.

Features that do not add any performance, such as the badges, will not be available through the GM Performance Parts catalog. However, as was the case with the components that make the Camaro 1LE and Camaro ZL1 so impressive on the race track will be available to everyone. Items like the track tuned suspension, the rear differential cooling system, the brake cooling package and the Recaro race buckets will be sold for those folks who want their Camaro SS to handle like the Camaro Z/28. Also, GM will sell cold air intake packages, high flow exhaust manifolds and the Z/28 exhaust system to get some more power out of the Camaro SS. Finally, I would guess that GMPP will sell the LS7 crate motor with the applicable installation package so those who want their 2010 and newer Camaro to perform like the Camaro Z/28 will be able to buy all of the components to do so. However, those cars still won’t look like the expensive and exclusive Z/28.

What is unclear right now is whether or not General Motors will sell the unique body panels of the Chevrolet Camaro Z/28 to those who don’t own a Z/28. The Z/28 has a unique front fascia that works with the brake cooling system and I would think that if the company is going to sell the brake cooling packages, they will also need to sell the fascia that carries the openings for said cooling channels. The Z/28 also features an aggressive chin spoiler, deeper reaching side sills and a prominent rear wing that all play a big part in the handling of the new Z/28 so if someone wants their Camaro SS to handle like a Z/28 – they will likely need to get those body bits as well.

There has been no official information from General Motors as to which components will be available and I would expect that at first, all of these components will be restricted to Z/28 owners. However, with GMPP offering performance packages that include items from the 1LE and ZL1, I would expect to see plenty of the go-fast goodies from the Camaro Z/28 in the performance parts catalog very soon.