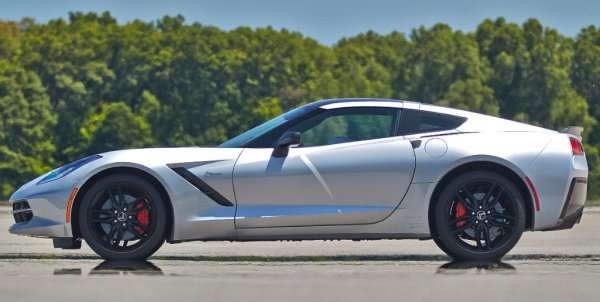 The 2015 Chevrolet Corvette Stingray has received some changes that should help it further dominate the premium sports car segment, but a “stop delivery order” issued by General Motors will prevent buyers from picking up their 2015 model year Stingray until a few issues are addressed – further emphasizing GM’s push for improved safety and overall quality.
Advertisement

The new C7 Chevrolet Corvette Stingray exploded onto the market for the 2014 model year and it has sold well enough to not just outsell the Porsche 911…it outsells every Porsche car combined while also crushing the crosstown rival Dodge Viper. For the 2015 model year, the Stingray gets some minor changes and a new 8-speed automatic transmission that will likely allow it to continue to comfortably crush every other car in the premium sports car sales battle.

Unfortunately, the added sales from the arrival of the 2015 Chevrolet Corvette Stingray are going to be delayed a bit, as General Motors has issued a stop delivery order to the dealerships around the country who have already taken delivery of the new model year C7. The company has found a pair of possible problems with the first 2015 Corvette Stingray models that could pose a safety issue so until they can inspect every car – dealerships aren’t permitted to deliver 2015MY Corvettes to buyers.

SEE ALSO: Car & Driver May Have Discovered a Major Problem with the 2014 Corvette

First, General Motors is concerned that a component of the airbag system that connects the driver’s side airbag to the steering wheel may be faulty. It is unclear exactly what they will be checking for – whether it is a matter of making sure that something it plugged in or actually inspecting part of the plug itself – but the automaker wants to inspect the driver’s side airbag assembly on about 2,000 examples of the 2015 Corvette Stingray. These C7 Corvettes are currently either at the plant or at dealerships around the country.

The second problem that required GM to issue the stop delivery order on the 2015 Chevrolet Corvette Stingray pertains to the rear brake system. The company is concerned that only one of the rear parking brake cables may have been properly installed and with only one side of the parking brake working, there is a better chance of a rollaway incident. This portion of the stop delivery order affects around 800 cars and the inspection process for this problem should be as simple as having a technician at the dealership inspect both rear parking brake assemblies to ensure that everything is hooked up and adjusted properly.

DON'T MISS: The C8 Corvette is Already On Its Way!

Stop Delivery Now Prevents a Recall Later
Since the fuss with the whole ignition cylinder issue hit GM hard, the automaker has been really pushing hard to make their vehicles as safe and as unproblematic as possible. This has led to a flood of new recalls that to some, come as just another black eye to the company. However, consumers and drivers alike should be happy to see that the company is willing to recall any problem – no matter how small. This stop delivery order will likely give the Corvette haters some ammunition in the world of internet trash talk, but this brief inspection process will only serve as a mild inconvenience that will ultimately help prevent more annoying recalls in the future.