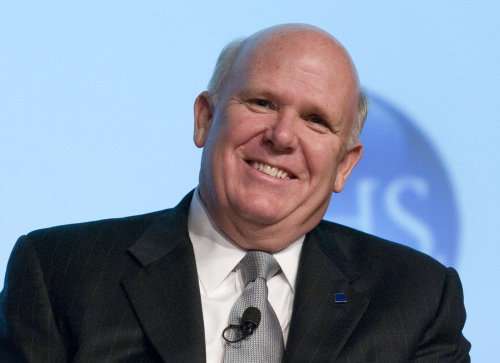 General Motors announced late last week that company Chief Executive Officer Dan Akerson has purchased another 25,000 shares of company stock – an amount worth over a half million dollars – increasing his total ownership to 272,838 shares.
Advertisement

When a high ranking member of the management team like Dan Akerson invests a large sum of money in a publicly traded company like General Motors, it shows that the people calling the shots believe in the future of the company. Akerson has repeatedly purchased fairly substantial chunks of GM stock with personal funds (as opposed to being awarded these shares as part of his compensation package) and this latest investment of $508,750 shows that while the stock price is low (very low, actually) – the man in charge still believes that the company has a bright future.

The most recent purchase of 25,000 shares of GM stock by Dan Akerson comes with a reported price of $20.35 per share which is quite a contrast from the $33.27 per share Akerson paid when he bought his first chunk of company stock in November 2010 following the company’s initial public offering (IPO). That original 15,000 shares cost him just under a half million dollars but with the continued drop in GM stock price; Akerson paid around $8,000 more this time around for 25,000 shares of common stock. Just considering the 15,000 that Akerson bought after the IPO, based on the current trading price of GM stock of $20.72 – Akerson is currently looking at a loss of $188,250. The good news is that should the price of GM stock rise to meet the IPO pricing – last week’s purchase of 25,000 shares at $20.35 per share would bring Akerson a profit of roughly $323,000.

Overall, Dan Akerson has paid roughly $2,360,800 for 85,000 shares of stock on a personal investment basis and the current value (as of 10am this morning) is “just” $1,761,200. This means that if the GM CEO were to sell right now, he would stand to lose some $600,000 strictly from those shares of stock purchased on a personal basis. Keep in mind that Akerson owns a total of 272,838 shares with those shares in excess of the 85,000 that he has purchased over the last few years coming to him as a portion of his compensation for serving as the CEO of the company. While those other shares technically didn’t cost him any money from his own bank account, the value of those other shares when they were issued to him are currently helping the GM CEO to see a loss on paper of roughly $1.8 million US Dollars.

One reason that company big wigs often buy large chunks of stock is to help improve investor confidence. Someone who is looking to invest their own money may find a given company to be “safer” when they see company executives investing large sums of their own money in said company. In this case, someone considering a purchase of GM stock may be more comfortable making the purchase when they see that – while prices are very low right now – the company boss is still investing his own money in the company.

Hopefully Dan Akerson’s decision to invest more personal money in General Motors will help encourage others to invest their own money but more importantly – I hope that GM continues making the right moves as an automaker to preserve the company’s future. Dan Akerson believes that they are on the right track but only time will tell.