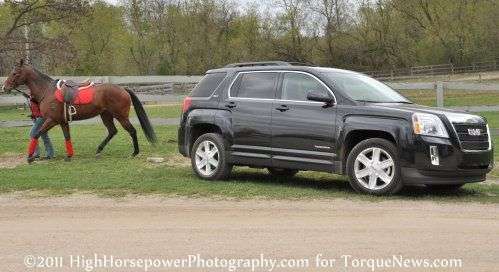 General Motors had another good month in August 2011, moving 218,479 vehicles for an improvement of 18% over August last year – making them the top dog in terms of sales volume and third behind Nissan and Chrysler in terms of growth.
Advertisement

In a month where things went downhill for American Honda and Toyota Motor Company, things moved full speed ahead for General Motors. All four of GM’s core existing brands showed positive growth last month compared to the same month in 2010 and while GM got the bad news that the Nissan Leaf had once again outsold the Chevy Volt, the Chevrolet Camaro was once again the top model in its class – beating the Dodge Challenger and Ford Mustang.

The top brand from General Motors in terms of growth was GMC, with the official sponsor of the NFL improving by 40%. The top model from GMC in terms of growth was the compact Canyon pickup with an increase of 132% in moving 1,606 trucks. The GMC Terrain was once again a top performer with the most units sold next to the Sierra truck lineup and with 81% improvement over last year, the small SUV was second among the GMC brand in growth followed by the Yukon XL which improved by 71%. The GMC Sierra truck lineup was the top model in terms of sales with 13,244 units sold followed by the Terrain with 7,875 SUVs sold and the Acadia rounded out the top three with 6,491 large SUVs sold.

The next best brand from General Motors in terms of growth was Chevrolet with a 16% improvement over last year while their 152,779 units sold made Chevy GM’s bestselling brand – trailing only Ford in the race for the American auto industry’s top selling single brand. The top model from Chevy in terms of growth was the Suburban SUV with 4,938 units accounting for a growth of 60% over last year. The Chevy Equinox was next in line with a 58% increase over last August followed by Chevy Traverse in third – meaning that Chevrolet’s top 3 models in terms of growth were sport utility vehicles. Who says big SUVs are dead? Chevrolet was led in total sales by the Silverado pickup lineup with 36,832 trucks sold while the sporty new Chevy Cruze led the way with 21,807 sedans sold. The Chevy Malibu was third in sales with the mid-sized sedan moving 17,840 units sold.

Next in terms of growth from GM was the Buick brand, with this affordable luxury brand improving by 12% in August 2011. The brand was led in growth by the redesigned Buick Regal which moved 3,820 units for a gain of 124% from last August. The roomy Buick Enclave was second in terms of growth with an improvement of 17% while the premium Buick LaCrosse moved 5,422 units (leading the brand) while improving by 2% over last year. The only vehicle from Buick that did not show growth last month was the Lucerne, which is on its way out of the lineup at the end of 2011.

The Cadillac brand was the “worst” in terms of both growth rate and sales among the GM brands with 13,302 vehicles accounting for an improvement of 4% compared to last year but 4% improvement is better than a decline in sales. The Cadillac CTS family led the brand in both sales (5,783 units) and growth (39%) while the SRX was second in the two categories (4,627 units sold, 7% increase) and the Escalade was third with 1,105 SUVs accounting for a gain of about 3%. Other than those three, every other model in the Cadillac lineup saw a decline in sales from August 2010 to August 2011 but the important part is the fact that the CTS and SRX are continuing to show strong sales. The Cadillac brand can expect some help once the new XTS and ATS models hit the market sometime in 2012.

Other August Sales News:
Chrysler Group leads the industry in growth in August 2011
Camaro beats the Mustang, Challenger and 370 in August 2011
Nissan Leaf outsells Chevy Volt by over 4 to 1 in August