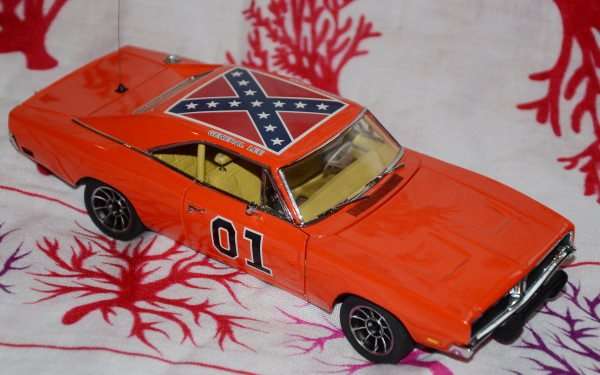 Warner Brothers has announced that the bright orange Dodge Charger from the Dukes of Hazzard television and movie series will never again be produced as a die cast toy or collectable due to pressure to eradicate the Confederate flag from modern day America.
Advertisement

One of the most recognizable Hollywood cars of all time is the bright orange Dodge Charger named the General Lee, which had the number 01 on the doors and the Confederate flag emblazoned across the top of the car. Over the past 20 years this car has been popularized for its high-flying antics, but when it was discovered that the Charleston church shooter had a great many pictures of himself with the Confederate flag on his website, a campaign to erase the flag from the American landscape quickly spread across the country. This began with the call to remove the flag from some state buildings in the south, but it really didn’t make any difference in the car world until Warner Brothers made an announcement that kind of rocked the muscle car world.

“Warner Bros. Consumer Products has one licensee producing die-cast replicas and vehicle model kits featuring the General Lee with the confederate flag on its roof–as it was seen in the TV series. We have elected to cease the licensing of these product categories.” This quote comes from Yahoo, who originally broke the story.

In other words, the General Lee Dodge Charger toys will no longer be produced from here on out.

Why Warner Brothers Can Do This
Since the news first broke that Hollywood company was killing off the General Lee Dodge Charger, some people didn’t quite understand why this was happening. Some people blamed Dodge/the Chrysler Group while others blamed the companies who actually produce the die cast replicas, but none of those parties had any say in this once Warner Brothers made their decision. Keep in mind, while Chrysler owners the rights to the Dodge Charger, Warner Brothers – who was responsible for the most recent movie – own the rights to the design of the General Lee. Anyone who wants to produce a General Lee Dodge Charger toy has to first get the approval of the owner of that intellectual property, and that is, unfortunately, the Hollywood production company.

Should any toy company going forward produce a General Lee Dodge Charger, they would likely face swift legal action from Warner Brothers, so it seems that we will never again see a new toy or die cast collectable of the General Lee. You know, because that will stop maniacs from lashing out mindlessly.

While this move seems frivolous at best, it shouldn’t come as much of a surprise as ultra-liberal Hollywood scrambles to do their part to prevent gun violence in the wake of the awful events in the Charleston Emanuel African Methodist Episcopal church. Also, with so many massive retailers like Walmart, eBay and Amazon pulling items with the Confederate flag, toy companies and the companies licensing the products have less incentive to continue to make them.

Banning Leads to a Price Boom
While this is frustrating news for General Lee and Dodge Charger collectors who are fans of the car, the TV show and the movie, this comes as good news for those folks who already have the items in their possession. Since Warner Brothers made their announcement, the value of General Lee die cast toys has skyrocketed, making items like my own Danbury Dodge Charger (at the top of the article) worth a great deal more than they cost when new. Selling them has become more difficult, but eBay seems to be allowing people to post General Lee items so long as the Confederate flag isn’t the focal point of the images.

Jim wrote on July 1, 2015 - 7:45pm Permalink
Downright goofy ! I and many others will be boycotting Warner Bros. All this accomplishes is to inflame and impassion the issue.