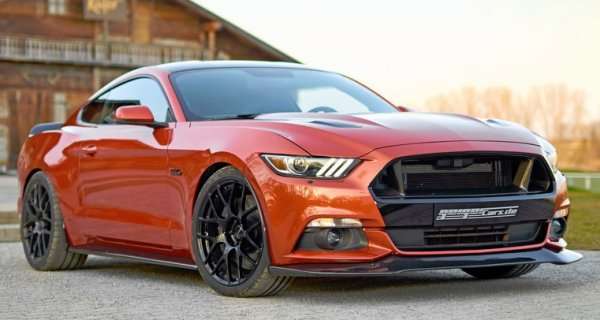 The German tuning experts at GeigerCars has announced a new package for the 2016 Ford Mustang GT, which adds a unique exterior appearance and engine modifications that lead to 820 horsepower – along with a price tag that starts just shy of $125k in US dollars.
Advertisement

Before getting into the features of the 2016 Ford Mustang Geiger GT 820, a quick bit of information on the company behind this wicked muscle car. Geiger Cars is a German company that imports all sorts of American vehicles which are generally not available through traditional local dealerships. Current options in the Geiger Cars stock showroom range from the Ram 1500 and Ford SVT Raptor (previous generation) to the Dodge Viper, Chevrolet Corvette, Chevrolet Camaro and – of course – the Ford Mustang.

Geiger Cars currently has a long list of available Ford Mustangs new and old on their factory stock list, including the newest Mustang in both 2.3L turbo-4, 5.0L V8 and Shelby GT350 form. However, those hardcore American performance who want a whole lot more performance from their new Ford Mustang might want way more than he 526hp offered by the most powerful modern stock Mustang can also turn to Geiger thanks to the tuning portion of their company.

The 2016 Ford Mustang Geiger GT 820 is their newest specially tuned package for the European market, packing enough power to outrun the most powerful performance from the local German automakers.

2016 Ford Mustang Geiger GT 820
The 2016 Ford Mustang Geiger GT 820 starts off as a simple 2016 Ford Mustang GT with the 5.0L V8, but the Geiger team tears the engine apart, replacing the bottom end with a stronger forged crankshaft, connecting rods and pistons. This extra strength is needed to handle the added force on the top end of the engine, which comes courtesy of a 2.9L supercharged. When mated with the cold air intake setup, the full stainless steel exhaust system and a proper engine tune to bring everything together – the output of these Mustangs is lifted from 435 to 820 horsepower. Also, the torque output jumps from 400 to 560lb-ft.

Next, the 2016 Ford Mustang Geiger GT 820 includes a sport tuned suspension system and all of the GT Performance Pack features (Brembo brakes, limited slip differential, 3.73 rear gear). There are no performance numbers available for the new Geiger Mustang, but I would expect that when well driven with a good set of tires, these beefy pony cars should be able to tickle the 10-second quarter mile range.

The only aspect of the 2016 Ford Mustang Geiger GT 820 that isn’t awesome is the price, as this built up pony car comes with a substantial price increase. The standard Ford Mustang GT with the 5.0L V8 and the manual transmission on the Geiger website costs 41,900 Euros ($47,775 USD based on current conversion rates) while the 2016 Shelby GT350 Mustang with the Track Package starts at 84,900 Euros ($96,807 USD). The Geiger GT 820 starts at 109,450 Euros ($124,800 USD), but when you consider the power advantages and the unique exterior components paired with the standard Ford Performance goodies – it is a great way for a wealthy American muscle car lover in Germany to get into a Mustang that will beat almost anything.

LG's New EV Battery Plant Is a Welcome News for Tesla
Tesla Giga Berlin's New Hurdle: It's Not Only the Gov't, but Now Tesla Itself
END_OF_DOCUMENT_TOKEN_TO_BE_REPLACED