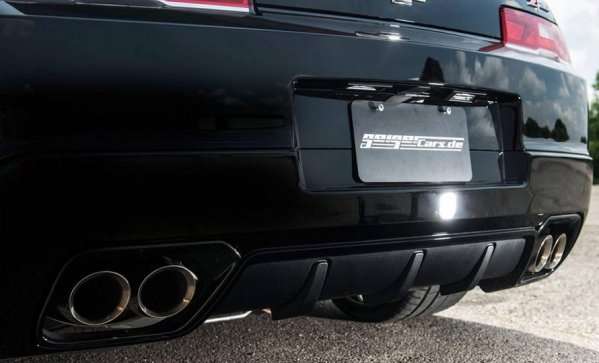 A handful of American tuning companies have helped the new Chevrolet Camaro Z28 but for European owners who need more power from the best handling GM muscle car ever – German tuner Geiger Cars has a package that ups the output to 620 horsepower.
Advertisement

The Chevrolet Camaro Z28 is the best handling and the most track capable General Motors muscle car ever…and there are plenty of good reasons to consider the new Z28 the best handling and most track capable American muscle car of all time. However, the Z28’s LS7 engine lacks the big power of the Mustang GT500, the Camaro ZL1 or the new Challenger Hellcat. With 505 horsepower, it can get around the turns of the Nurburgring quicker than any American muscle car ever, but it will be outrun on a long straight by the other, more powerful muscle cars. In the USA, new Z28 owners can turn to the likes of Lingenfelter or Callaway to pull big performance from their track tuned Camaro. For European owners, the folks at Geiger Cars are the people who can make sure that your Z28 will hammer the quarter mile just as well as the more powerful American muscle cars.

How Do You Improve the Perfect Camaro?
The new Chevrolet Camaro Z28 is billed as the best handling and most track capable Camaro of all time so you have to wonder how tuners will make it even better. Fortunately, since the new Z28 was introduced with “only” 505 horsepower – prompting skeptics to cry that it simply isnt powerful enough to compete – so tuners around the world know exactly how to improve the perfect Camaro. Big power.

Where the American tuners provide big power in the Chevrolet Camaro Z28 by adding a supercharger, Geiger has seemingly added big power without forced induction. Geiger has been unfortunately tight lipped about how they worked the LS7 from 505 horsepower and 481lb-ft of torque to 620 horsepower and 535lb-ft of torque, but based on the images of the Geiger Z28, they definitely haven’t used a supercharger. Honestly, in looking at the pictures originally posted by the folks at GTSpirit, the Geiger Cars Camaro Z28 doesn’t look any different than the Camaro Z28 at your local American Chevy dealership – but with 620 horsepower and a package price of 13,000 Euros ($17,400 USD), it is very clear that Geiger has done some extensive work to the LS7 to pick up that power.

Where Did Geiger Find the Power?
Considering how much the Geiger Cars Camaro Z28 looks factory stock, I would guess that they have made their extra power on the inside of the LS7 V8. General Motors’ LS engines have proven that modifications like unique camshafts, ported/polished cylinder heads and a good set of headers can help make big power and – aside from the headers – it is hard to visually locate any of those modifications (as opposed to a supercharger that is far more noticeable in the engine bay). Building up the internals of the LS7 would most certainly lead to those big power numbers and with a price of over $17k, it could certainly include a bunch of internal components. Best of all, sticking to internal components rather than adding a blower allows Geiger to keep the weight balance of the car that makes it such a beast on the road course.

I have reached out to Geiger Cars and should I hear back from them with more specifics on how they reached 620hp without a blower – I will provide full information to all of the TorqueNews readers.

Geiger Left the Rest of the Z28 Alone
While Geiger tuned the LS7 engine of the Camaro Z28 to make big power, they have left the rest of the components alone and it is hard to dispute that approach. With the Camaro Z28 seemingly being the best handling American muscle car of all time with both a suspension setup and a braking system that is as near race spec as you can get, there is really no need to change anything in those areas so in adding a bunch more power – the Camaro Z28 from Geiger Cars packs the power needed to keep up with the more muscular models with world class handling that comes from the factory.