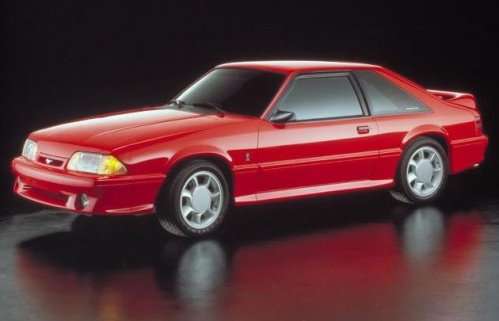 This morning, Ford Motor Company announced on Facebook that on February 6th, 1992, the company officially formed the new task force that would become the Special Vehicle Group (SVT) – the minds behind pretty much all of the highest performance Ford products in the past 20 years.
Advertisement

While the group that would become Ford’s Special Vehicle Team began putting together the pieces in 1991, Ford officially announced the existence of the SVT group 20 years ago today. This group would be tasked to design unique, high performance versions of existing Ford products which over the years have focused on the Ford Mustang and the Ford F150 but SVT has also offered their own version of the Ford Focus and the Ford Contour. As part of the announcement, the Ford Motor Company Facebook page featured the picture on the right, showing the 1993 SVT Mustang Cobra – the car that began the storied success of the SVT group.

The Special Vehicle Team’s first project was to design a high performance version of the mighty Ford Mustang which, at the time, was slated to be called the Ford Mustang GT Plus. However, in an effort to differentiate the high performance SVT Mustang from the traditional Mustang GT – SVT went with the name Mustang Cobra. Also during 1992, Ford’s Truck Operations team hands over their “F150 Performance Truck” to the SVT engineers – which would lead to the creation of the SVT Lightning.

On the Ford Special Vehicle Group’s 20th birthday, it seemed like a good time to take a look back at what SVT has done over the past 20 years.

In 1993, the first production version of SVT vehicles made their debut at the Chicago Auto Show in the form of the new SVT Mustang Cobra and the SVT F150 Lightning. The original SVT Mustang Cobra was powered by a modified version of the 5.0L Ford V8 featuring the GT-40 cylinder heads and intake manifold – a setup that allowed the first SVT Mustang to put out 235 horsepower and 280lb-ft or torque. Later in 1993, SVT would also roll out a limited edition (107 units) of the 1993 SVT Mustang Cobra R. The Cobra R was intended for race use, packing the same engine as the other 1993 Cobra models but the R received larger brakes, Koni adjustable suspension components, an engine oil cooler and a power steering cooler. The Cobra R also did not come with a rear seat. The 1993 SVT F150 Lightning was powered by a 5.8L V8 modified to make 240 horsepower and 340lb-ft of torque, with a unique look and suspension/chassis changes to make it handle like a true sport truck.

In 1995, the SVT engineers reintroduced their Mustang Cobra R – now packing a modified version of the 351 cubic inch (5.8L) V8 found in the Ford F150. The 1995 Mustang R packed 300 horsepower and just 250 examples were built. The standard 1995 SVT Mustang Cobra received a limited edition run of 499 examples of a unique hard-top convertible. This would be the only year for this removable hard top option on the Mustang. 1995 would be the final year for the SVT F150 Lightning until returning in 1999.

For 1996, Ford did away with the 5.0L V8 in favor of a new 4.6L “Modular” motor. SVT modified this new motor with a set of 32-valve cylinder heads to make 305 horsepower in the 1996 SVT Mustang Cobra. These were available as both a coupe and convertible, and for those who wanted a truly unique 1996 SVT Cobra, there were a special run of Cobras featuring the new color-changing “Mystic” paint code. Also in 1996, Ford introduced a concept sketch of the new SVT Contour – a midsized sport sedan destined for production.

In 1997, the SVT Contour was introduced, powered by a tuned version of the Ford 2.5L V6, making 195 horsepower with special brakes, suspension and body dressings allowing the SVT Contour to handle as well as it accelerates. There were no changes to the Mustang Cobras in 1997.

1998 was a slow year for the Special Vehicle Team, as their vehicle offerings went unchanged aside from new wheel options and some different colors to the vehicles.

1999 was a huge year for Ford’s SVT group, as it saw the return of the SVT F150 Lightning with a serious power upgrade. Gone was the old 351 cubic inch truck engine and in its place – a supercharged 5.4L Triton V8 packing 360 horsepower and 440lb-ft of torque. Thanks to this huge engine, a unique exterior design and suspension/braking system changes, the 1999 SVT F150 Lightning set the new standard for the sport truck segment. 1999 also saw the SVT Contour get 5 more horsepower for a total of 200 while the SVT Mustang Cobra got new sheet metal as part of the Ford Motor Company refresh to the Mustang lineup (known as the New Edge Mustang). The 1999 Mustang Cobra packed a new independent rear suspension and a revised version of the 32-valve 4.6L SVT V8 which offered an advertised 320 horsepower. Unfortunately, it was discovered that the 1999 Mustang Cobra only made 305 horsepower so Ford brought these high performance Mustangs back into the dealerships for a new engine calibration that allowed these models to make the right amount of horsepower.

In 2000, there was no standard SVT Mustang Cobra available but SVT did unveil the newest Mustang Cobra R, which was the most powerful SVT Mustang built to date. The 2000 Mustang Cobra R was powered by a naturally aspirated version of the 5.4L V8 that made 385 horsepower and this package did not include any “frills” – such as the heater, air condition, stereo or rear seat. The Cobra R did include special side exit exhaust, race style front seats and a unique red paint scheme with the R badge. Only 300 examples were built for 2000. The SVT F150 Lightning remained unchanged in 2000 as did the SVT Contour, which would be gone after the 2000 model year as the Contour ended its US production.

For 2001, the SVT Mustang Cobra returned with the proper 320 horsepower output, along with new front seats and the bold COBRA font across the rear fascia. The SVT F150 Lightning received a facelift with the rest of the F150 models as well as picking up 15 more horsepower – now packing 380hp. It was also during the 2001 year that Ford introduced the SVT Focus Concept at the Chicago Auto Show.

In 2002, there was once again no SVT Mustang available but the world was introduced to the production version of the new SVT Focus. This sporty hatchback packed a 170 horsepower 4-cylinder, a six-speed manual transmission, four wheel disc brakes and a specially tuned suspension system. There were no major changes to the F150 Lightning but in 2002 the SVT groups specially tuned 5.4L supercharged truck engine was used in the F150 Harley Davidson edition. Also, the 2003 SVT Mustang Cobra was introduced in concept form at the Chicago Auto Show, powered by the new SVT designed supercharged version of the 4.6L modular motor – making 390 advertised horsepower and 390lb-ft of torque.

2003 was a big year for SVT as the new SVT Mustang Cobra – soon to be dubbed the Terminator – was introduced in production form. Powered by the new supercharged 4.6L 32-valve V8, it offered an advertised 390 horsepower and 390lb-ft or torque but multiple tests proved that these vehicles made well above the advertised output. It was during the 2003 year that the Mustang Cobra asserted itself as one of the top performance models available on the US market. 2003 brought about a new 5-door option for the SVT Focus in addition to the previous 3-door hatchbacks and in 2003, the SVT F150 Lightning was certified as the fastest production pickup truck was a speed of 147 miles per hour.

Since the 2004 model year, things have been different for the Special Vehicle Group. There was no high performance Mustang in the 2005 or 2006 model years and when the Cobra returned for 2007, the new high end Mustang sported the Shelby GT500 name rather than SVT badging. However, the SVT group had a major part in the planning and design for the new GT500 and has continued to work on GT500 models since then.

While the SVT name does not appear on the Harley Davidson models, the supercharged V8 developed for the F150 Lightning remained as the key feature in the Harley models for a few years after the Lightning was gone and arriving in 2009 was the new SVT F150 Raptor. This truck took a very different direction than the SVT F150 Lightning, with the modifications made to the Raptor making for an idea off-road racer. The initial SVT Raptor was powered by a 5.4L Triton V8 but beginning in 2010, the new 6.2L SVT V8 is the sole engine in the Raptor.

Congratulations to Ford's Special Vehicle Team for offering up 20 years of high performance greatness and here is to another 20 of ground pounding cars and trucks from the group that has offered some of the most powerful American vehicles in the last two decades.