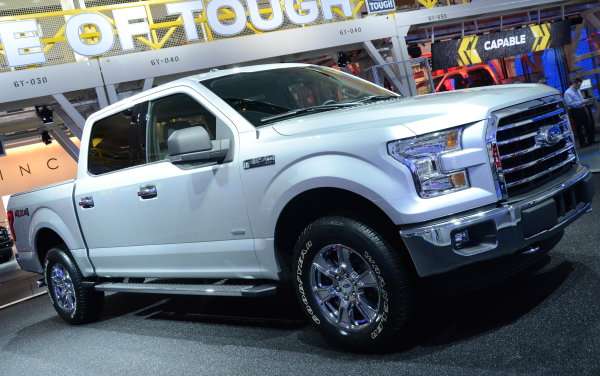 While the Chrysler’s EcoDiesel gives the Ram 1500 the title of the most efficient half ton truck in America, the Ford F150 could soon feature either a hybrid or diesel drivetrains – both of which are rumored to be in the works behind the closed doors at Ford Motor Company.
Advertisement

Right now, Ford is happy that they have the most efficient gasoline powered pickup, but I have a hard time believing that the Motor Company engineers aren’t working up a more efficient F150 pickup. My expectations of a more efficient F150 are supported by a collection of rumors indicating that Ford is indeed working on something to beat the Ram EcoDiesel. In fact, they could be working on a two options, including a light duty diesel and a hybrid drivetrain.

The Light Duty F150 Diesel
For years now, truck lovers have been clamoring for light duty diesel pickups and while Ford F150 fans were hoping to see it arrive with this new generation, the Ram 1500 was the first half ton truck in America with a diesel engine. Ford is quick to point out the high price of both buying and feeding the diesel engine, but Chrysler counters by pointing out the massive fuel economy advantages and the impressive towing capabilities. Regardless of how Ford markets their advantages over the EcoDiesel, the arrival of the Chevrolet Colorado with a diesel could further encourage the Motor Company to introduce a light duty diesel of their own. Best of all, this would not be a new idea for Ford.

Back in 2008, I spoke with a local Ford Motor Company employee who obviously wished to remain unnamed, who was telling me about a pair of interesting engine projects going on behind closed doors at Ford. He told me about a light duty diesel engine and – get this – a twin turbo V6 that was being designed to be a premium engine. A twin turbo gas powered V6 seems incredible at the time, but the EcoBoost has become the most popular F150 engine. However, the decline of gas prices and the relatively high prices of diesel fuel in 2008-2010 allegedly caused Ford to put the light duty diesel engine on the back burner.

Rumor has it that with the growth of light duty diesel engines in America, Ford is back to work on a diesel engine option for the F150. Needless to say, that would allow Ford to take a real shot at the Ram EcoDiesel.

The F150 Hybrid
The Chevrolet Silverado and Dodge Ram 1500 have both been offered with hybrid packages in the past, but the Ram Hybrid was not sold to the general public and the Silverado Hybrid didn’t do well enough to make it through to the newest generation of the Chevy pickup. The Ram truck never had a chance to succeed with the public and the Silverado was far from a hit, but the F150 could be the first real half ton truck to succeed with a hybrid drivetrain.

The 2015 F150 is the lightest truck on the market today with the new aluminum body and with the efficient pickups of the past, the weight was the ultimate killer of efficiency. Also, Ford Motor Company has a vastly more successful hybrid program than GM or Chrysler, so when you take Ford’s advancements in hybrid technology and apply them to the lightest half ton truck in America – we could finally have a hybrid pickup on sale that can succeed.

Unfortunately, Ford Motor Company has been very quiet about any official diesel F150 plans, but they have made it clear that there is indeed an F150 Hybrid in the works. I don’t believe that the best-selling truck company will sit by and let Chrysler’s Ram EcoDiesel lead the half ton segment in fuel economy without a fight for very long, so I wouldn’t be surprised to see the hybrid package arrive in the F150 as soon as 2016.