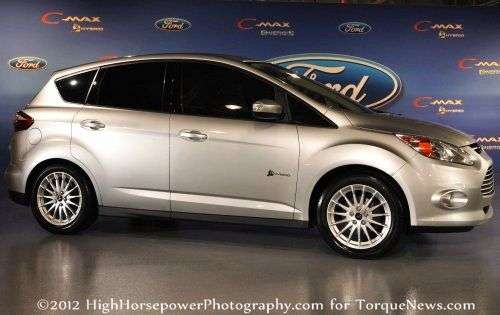 The 2013 Ford C-Max is a roomy 5-passenger, 5-door “hybrid utility vehicle” set to take on the likes of the Toyota Prius V head on and starting today, Ford dealerships around the United States are officially taking orders for the C-Max – introducing America to Ford’s first all-hybrid model.
Advertisement

Like the Toyota Prius that comfortably dominates the hybrid market in the United States, the new Ford C-Max hybrid is available strictly as a hybrid. Built on the same architecture as the popular Ford Focus, the C-Max will take on the Toyota Prius V head on – with a lower starting price, more interior space and better fuel economy. We will have to wait for official fuel economy figures closer to the public launch of the C-Max but with a base price of $25,995, the new Ford hybrid utility vehicle is $500 less expensive than the Prius V.

The 2013 Ford C-Max is designed to seat five with plenty of cargo room out back thanks to the high roofline. The result is 99.7 cubic feet of passenger space compared to the 97 feet offered by the Prius V; while also packing 41 inches of front headroom and 39.4 inches for the rear seats in the C-Max compared to 39.6 front and 38.6 rear for the Toyota. With the rear seats in the upright position, the C-Max features 24.5 cubic feet of cargo space but when the 60/40 rear seat is completely folded down, the C-Max offers an impressive 54.3 cubic feet of overall cargo space.

“C-MAX Hybrid offers better fuel economy, performance, technology and functionality than Prius v – and C-MAX Hybrid customers will pay less at the dealership and at the pump,” said Ken Czubay, vice president, U.S. Marketing, Sales and Service. “Ford is delivering the power of choice for leading fuel economy across its lineup – from EcoBoost to electrified vehicles – because customers increasingly want to save money at the pump, even as gas prices rise over time.”

The 2013 Ford C-Max is powered by a 2.0-liter Atkinson-cycle 4 cylinder engine mated to an electric motor and a lithium ion battery. This combination makes a total of 188 horsepower which is sent to the front wheels via an Electronically Controlled Continuously Variable Transmission (eCVT). The advanced hybrid drive system of the C-Max allows the car to operate strictly under electric power at low speeds and low load levels while providing assistance to the gasoline engine at higher speeds. The gasoline engine provides motive power under load and at speed while also continually charging the lithium ion batteries while traveling.

The 2013 Ford C-Max Hybrid is built at the same Michigan Assembly Plant in Wayne Michigan as the Ford Focus, with the hybrid drivetrain components being built at the Van Dyke plant in Sterling Heights Michigan – making the affordable new C-Max the most American hybrid vehicle sold in the country. Ford expects to have C-Max hybrids in dealerships this fall with the C-Max Energi plug-in models following.

LG's New EV Battery Plant Is a Welcome News for Tesla
Tesla Giga Berlin's New Hurdle: It's Not Only the Gov't, but Now Tesla Itself
END_OF_DOCUMENT_TOKEN_TO_BE_REPLACED