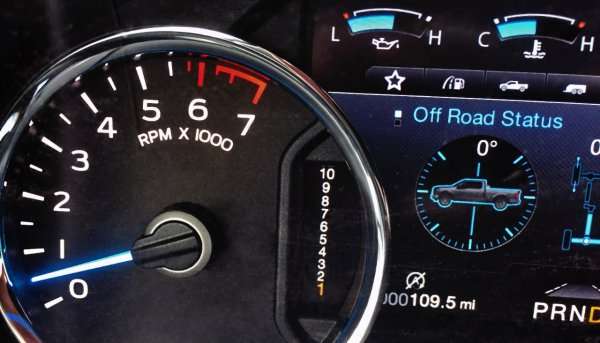 Ford Motor Company hasn’t announced exactly when the 2017 F150 pickups with the new 10-speed automatic transmission will reach dealerships, but the image above – showing the shift indicator area of the F150 gauge cluster – leads me to believe that the arrival of the industry’s first 10-speed gearbox cant be far off.
Advertisement

The Ford F150 10-Speed
The new 10-speed automatic transmission in the 2017 Ford F150 was developed in cooperation with General Motors and when it arrives, the F150 will be the first mass produced passenger vehicle in the US to have more than 9 speeds. This new gearbox will help to improve performance in every way while also improving fuel economy measures by a significant margin over similar EcoBoost trucks with the current 6-speed automatic.

This 10-speed automatic is the first transmission from Ford to be built without the use of cast iron, instead using aluminum and other high tech, lightweight materials inside and out. This makes the entire transmission lighter, but it also makes the moving parts inside lighter – reducing the amount of effort from the engine needed to turn the wheels while cutting pounds from the overall curb weight.

Next, the fact that this new gearbox has 10 speeds will afford the new 2017 F150 improved performance, improved working abilities and improved fuel economy numbers. The 8th, 9th and 10th speeds are all overdrive units, allowing the engine to run at a very low RPM while cruising at highway speeds. However, with those fuel-friendly higher gears, the numerically lower gears can be adjusted more aggressively for improved acceleration and improving pulling or hauling abilities. With the current 6-speed automatic transmission, there are 2 overdrive gears, but since there are “only” 4 gears before hitting overdrive, those numerically lower gears have to be less aggressive. On the other hand, the 1-6 gears of the 2017 F150 with the 3.5L EcoBoost V6 will offer far better acceleration than the current gearbox while the “extra” gears will afford owners better fuel economy.

Finally, in addition to a towing mode that will adjust the shift schedule for better working abilities, the 2017 Ford F150 will have a Sport Mode which will improve the driving dynamics for those who like to go fast in their twin turbocharged pickup.

With this first image of the 10-speed gear indicator, it shouldn’t be long now before the 2017 F150 with the new transmission begins to arrive in dealerships around the USA.

larry parham wrote on June 23, 2016 - 8:01am Permalink
For 3 long years I have waited for the 10 speed transmission in the f 150 Platinum 4x4. When it was announced that the 17's would finally get the transmission I was over joyed. But my anticipation has now turned to anger. I have been driving Ford trucks since 1977. For nearly 40 years I haven't even been on the competition's lot. BUT hearing the v6's would get the transmissions and NO mention of the 5.0 has my blood boiling !!! I HAVE NO INTENTION OF BUYING A FULL SIZE 4 DOOR TRUCK WITH A V6. FOR THE FIRST TIME IN 40 YEARS I WILL GO TO THE COMPETETORS LOTS AND START SEARCHING FOR ME A NEW TRUCK !
Dave wrote on June 24, 2016 - 11:32am Permalink
V6 ? no way I would buy a 1/2 ton with a v6 males no sense If you want a midsize engine buy a midsized truck
TimU wrote on July 4, 2016 - 4:17pm Permalink
My brother is working on this transmission at the Livonia, MI transmission plant and tells me horror stories about it. Think FCA's 9 speed software programing is bad. Wait for this boat anchor!
Ernest Johnson wrote on July 7, 2016 - 10:16am Permalink
THE 3.5 V6 2015 HAS MORE POWER & THE V8 I HAD IN MY OLD PICK UP?
Jack wrote on July 27, 2016 - 1:45am Permalink
This midsize engine you speak of already blows the doors off any stock V8 half ton in both performance and towing. Imagine what it will do with 50 more ft.lb's of torque and 10 more hp.