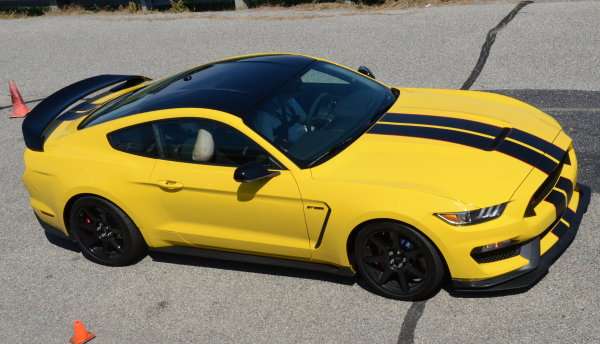 The folks at Motor Trend put the 2015 Chevrolet Camaro Z28 head to head with the 2016 Ford Shelby GT350R Mustang and, as you might expect, the newer Mustang took the overall win – beating the Camaro in almost every metric of the comparison.
Advertisement

Now, the elephant in the room and the excuse that all of the Chevrolet fanboys will use is that the Camaro Z28 is a 2015 model while the Mustang is a 2016 model. This 2016 Mustang is identical to the 2015 Shelby GT350R and while the Chevy guys will then turn to the excuse of “it is a new gen Mustang against an older generation Camaro”, but at the end of the day, this is the best comparison that GM has for the Shelby GT350R right now.

Yes, there will almost assuredly be a 6th generation Camaro Z28 or ZL1 or whatever GM calls it that will knock the new Shelby Mustang off of its high horse, but for the time being, Motor Trend compared the best Camaro available with the new Shelby GT350R Mustang – which is the best Mustang available.

Mustang GT350R VS Camaro Z28
In the Motor Trend head to head comparison between the 2016 Ford Shelby GT350R Mustang and the 2015 Chevrolet Camaro Z28, the Mustang was the favorite car on the street, the track and overall. Although the crew at Motor Trend has praised the Z28 in the past (for very good reason), the team including racer Randy Pobst found the new Shelby Mustang to be the better of the two.

Some people will insist that this was expected, since the Mustang is brand new while the Camaro Z28 is a few years old, but at the end of the day, this is a clear changing of the guard in the world of road-handling muscle cars. The Camaro Z28 has seemingly officially been dethroned as the most track capable muscle car in all of the land, and the Mustang GT350R claimed that title in a big way.

GT350R Outruns the Z28
When we look at the numbers from this comparison, the 2016 Ford Shelby GT350R Mustang took it to the Camaro Z28 in pretty much every category.

In straight line acceleration, the two cars were even when running from a stop to 30, 40 and 50 miles per hour, but in the dash to 60, the Mustang was a tenth of a second quicker. In the race to 80, the Mustang was 3 tenths ahead and in the run to 100, the Mustang was a full half second ahead of the Camaro, with a time of 8.5 seconds for the Mustang and 9.0 for the Camaro. For reference, the Hellcat Challenger that I tested earlier this year routinely got to 100 in the high 7 second range.

In the 45-65mph passing test, the Mustang was a tenth of a second quicker and in the quarter mile, the Mustang ran a 12.1 at 119mph to the Camaro’s 12.3 at 116mph. However, neither of these cars are made for drag racing, and handling numbers are what really matter.

Finally, when lapping Chuckwalla Valley Raceway, Randy Pobst was able to turn a lap time with the new Shelby GT350R that was over a second quicker than the Camaro Z28. The Camaro made it around the track in 1:59.03 while the Mustang ran a best lap of 1:57.87.

You can click here to see the full breakdown at Motor Trend, but it certainly appears for now that the new Ford Shelby GT350R Mustang has proven itself to be the superior track car in the American muscle car segment.