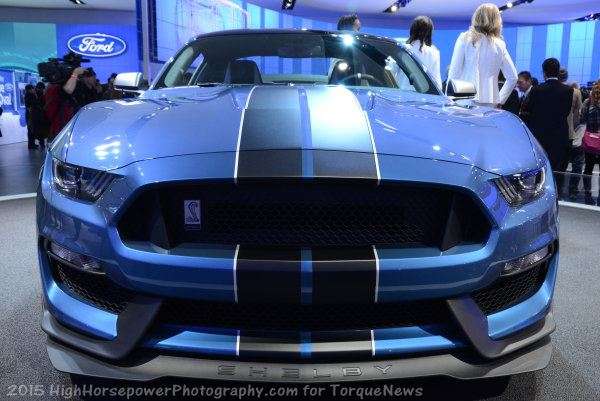 The folks at Mustang6g have gotten ahold of the pricing for the 2016 Ford Shelby GT350 Mustang and it is much lower than we expected, with pricing beginning under $50k for the GT350 while the GT350R starts just over $60k – making the new GT350 pairing an incredible bargain in the current performance car market.
Advertisement

Thanks to the rabid Mustang fans at Mustang6g.com, we have discussed the package pricing for the 2016 Ford Shelby GT350 Mustang in the past, but this is the first concrete pricing information that we have seen for the next generation super-Stang. These numbers are not officially official, but they come from what certainly appears to be legitimate Ford dealership documents. Until proven otherwise, we are going to call these the actual pricing figures for the 2016 Shelby GT350 Mustang.

The 2016 Shelby GT350 Price
The 2016 Ford Shelby GT350 Mustang comes with a 5.2L flat plane V8 expected to deliver at least 500 horsepower and at least 400lb-ft of torque, while a monster braking system and a high tech suspension system will help to make this the best-handling Mustang ever. When combined with the unique interior and exterior appointments, the 2016 Shelby GT350 comes with a premium price tag compared to the Mustang GT, but it looks as though that premium price isn’t quite as big of a jump as we had expected.

The 2016 Mustang Shelby GT350 will have a starting price of $47,870, which does not include the $825 destination fee or the $1,300 gas guzzler tax, so when you add in those unavoidable costs, you get an out-the-door price of $49,995. This makes it a bit pricier than the Boss 302 from the previous generation Mustang, but this car is unquestionably more extreme than the Boss 302 – not to mention the fact that it will be the least expensive 500 horsepower car in America.

As we had reported in the past, the Shelby GT350 Mustang can be optioned up with either a Technology Package for $7,500 or a Track Package for $6,500 – but not both.

The 2016 Shelby GT350R Price
Those next generation Shelby Mustang buyers who want even greater performance (and exclusivity) will want to opt for the 2016 GT350R. The “R” package adds some unique carbon fiber aero bits and carbon fiber wheels wrapped in Michelin Pilot Sport Cup 2 tires while cutting 130lbs from the interior, putting the total emphasis on track readiness, even though it is street legal. This package adds $13,500 to the price of the GT350, bringing about a base MSRP of $63,495.

That might seem like a big chunk of change for a Mustang that “only” has 500+ horsepower, but we should keep in mind that the key competitor for the new Shelby GT350R is the Chevrolet Camaro Z28. The Z28 is currently the standard for road-gripping muscle cars and it costs $75,000, so the GT350R is $11,505 less than the Camaro.

The GT350R has an optional Electronics Package that adds some infotainment goodies for $3,000.

Again, these prices aren’t official from Ford Motor Company, but this information comes from documents that appear to be legit dealership papers and they come from Mustang6g – a site which has gotten ahold of more than a few bits of accurate information well before the official word came from Ford.