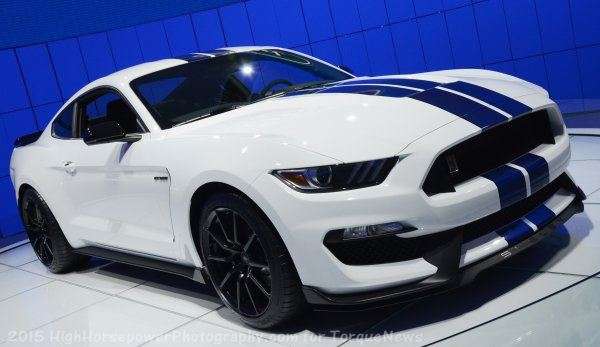 When the Ford Shelby GT350 Mustang was first introduced last year, the Motor Company promised that the new flat plane V8 engine would deliver at least 500 horsepower and 400lb-ft of torque, but new comments made by a Ford exec indicate that it will be at least 520 horsepower.
Advertisement

The Ford Shelby GT350 Mustang is very different from the previous Shelby GT500 Mustang. Where the GT500 was a supercharged beast with 662 horsepower primed for drag strip dominance, the new GT350 is built to dominate the road course. The key difference between these two Shelby Mustangs is that the new GT350 uses a naturally aspirated, flat plane V8 measuring 5.2 liters while the previous GT500 had a supercharged 5.8L V8. As a result, the newest Shelby will not have the crazy high power output, but with promised figures of 500+ horsepower and 400+ lb-ft of torque, the new GT350 will have plenty of power to compete with the key rival – the Chevrolet Camaro Z28.

The Camaro Z28 packs 505 horsepower and 480lb-ft of torque, which when paired with the aerodynamic body, the race-ready suspension and the massive Brembo brake package, makes the modern Z28 the most road course capable muscle car of all time. Really, the Camaro Z28 is unlike any American muscle car that we have seen in the past, with track numbers rivaling those of foreign supercars. It will be a tough fight for the new Shelby GT350 Mustang, but it sounds as though Ford will pack a bit more power into their new Shelby Mustang, giving it a clear advantage in at least one area.

100 Horsepower per Liter
A member of the automotive community Mustang6g.com recently attended a question and answer session with Ford’s Shelby brand manager Jim Owens, and the new GT350 Mustang was the obvious hot topic. No solid numbers were announced, but Owens did state that the new Shelby GT350 would derive at least 100 horsepower per liter from the new flat plane V8. Ford had initially stated “at least 500 horsepower” and if the new 5.2L V8 offers exactly 100 horsepower per liter, the resulting 520 horsepower would be in that original range.

Jim Owens also stated that the new 5.2L flat plane V8 in the Shelby GT350 Mustang would have a redline of 8,250rpm. This high engine RPM will be ideal for road racing, while the output of at least 520 horsepower will give the new Shelby an advantage over the Camaro Z28. Also, the new Shelby GT350R should be the lightest of the modern Mustangs, so it should be considerably lighter than the Camaro while even the standard GT350 should have a clear weight advantage over the 3,800lbs Z28.

The Ford Shelby GT350 Mustang still doesn’t have an official model year, but the company has indicated that the new road racing muscle car will reach showrooms this year, so it seems almost impossible that we would have to wait much longer for full information. If Ford plans to begin selling these cars during the fourth quarter of 2015, they will need to offer up full specifications a few months before they go on sale.