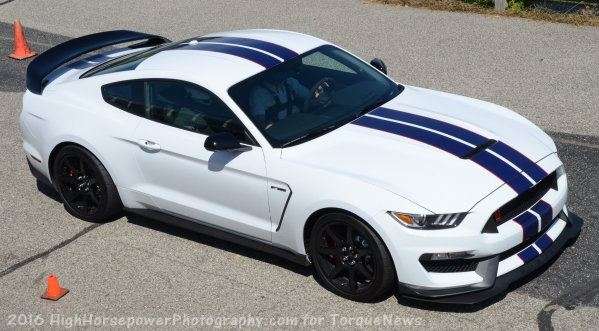 Ford Shelby GT350 Mustang Could Get an Automatic Transmission

According to the usually reliable information from Mustang6g.com, the Ford Shelby GT350 and GT350R Mustang could be getting an automatic transmission in the near future, but rather than a standard fluid-driven gearbox, the Motor Company could opt for a lightning-quick dual clutch transmission – which would further improve the performance of Ford’s newest super muscle car.
Advertisement

The new Ford Shelby GT350 Mustang comes in two forms and both of them come exclusively with a 6-speed manual transmission, but based on a report from road & Track citing Mustang6g.com, Ford’s fastest pony could be getting even quicker with the introduction of a dual clutch automatic transmission.

Why the new GT350 Mustang Needs an Automatic
Now, I am sure that there are lifelong American performance car owners and fans reading this while thinking that a proper muscle car should only have a manual transmission, but times have changed. Manual transmissions might still put more power to the wheels and provide more driving excitement, but if Ford wants to keep up with the Jonses from GM and Dodge, the new Shelby needs an automatic transmission.

Considering that the new Camaro ZL1 has a 10-speed automatic which was developed jointly with Ford Motor Company, I expected that the GT350 and GT350R would eventually get that same 10-speed fluid-driven gearbox, but the folks at both Car & Driver and Mustang6g believe that the new Shelby Mustang will eventually get a dual clutch transmission. This is the higher tech option of the two and it should yield even quicker shifts than the traditional automatic transmissions from GM and Dodge (although GM points out that their 10-speed shifts faster than Porsche’s dual clutch), but it will likely add more to the final price than the GM or Dodge transmissions.

Whether the future GT350 and GT350R Mustang get a traditional fluid driven automatic or a fancy dual clutch, we can expect that the Shelby will be quicker from 0-60 and quicker down the quarter mile, but it will also allow for quicker, more precise shifts when being driven on a road course, so the addition of a good automatic transmission – dual clutch or not – should improve the performance of the GT350 Mustangs in pretty much every way.

Finally, as I mentioned above, a dual clutch automatic transmission in the Shelby GT350 and GT350R Mustang will make it more appealing to those buyers who don’t want (or cannot handle) the manual transmission. With fewer and fewer cars coming with a manual transmission, less people know how to drive one and that has led to a boom in sales for performance cars with automatic transmissions. The Corvette Z06 and Hellcat Challenger have proven to be more popular with the automatic and, provided that the Shelby sees the same performance gains as the Camaro and Challenger, I would expect that an automatic GT350 will improve sales there as well.

Of course, this is all speculation based on information that Mustang6g has and that Car & Driver has seen, but there has been no official word from Ford Motor Company. Mustang6g has been right about most of their information in the past two years and I don’t expect that to change now, so there seems to be a very good chance that the future Shelby Mustang will have a dual clutch automatic.

FactChecker90803 wrote on October 10, 2016 - 12:43am Permalink
We all need to remember, that DCT's are alot heavier then 3 pedal manuals and fluid filled torque converted automatics. What advantage will there be in having faster shifts, if your adding a transmission that's 125 to 150 lbs heavier.
Bob wrote on January 29, 2017 - 1:10pm Permalink
Actually Dodge didn't develope that 8 speed by themselves. Its made by ZF and is used in other cars like the Aston Martin Vanquish. Chevy also didn't develop their 10 speed soley either. It was made both by Ford and Chevy