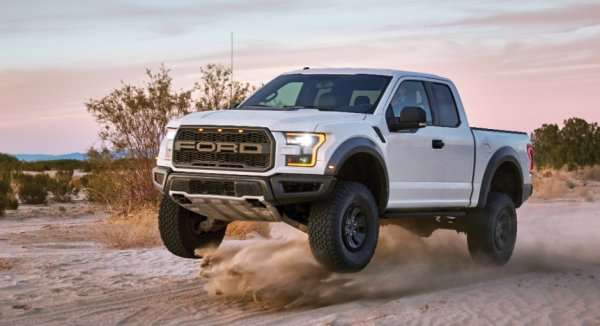 We still don’t know a great many things about the 2017 Ford F150 Raptor, including the engine output, the price or when it will actually reach dealerships, but the Motor Company has launched the first of six videos showing off different features of the new high performance pickup truck.
Advertisement

When the 2017 Ford F150 Raptor arrives this fall, it will be the most capable off-road truck ever to wear the blue oval, with a new version of the 3.5L EcoBoost V6 mated to a new 10-speed automatic transmission. We don’t know how much power this new EcoBoost will have, but the automaker has promised that it will out-muscle the 6.2L V8 which powered the last generation SVT Raptor, so the new mill will have more than 411hp and more 434lb-ft of torque.

We also don’t know how much the 2017 Raptor will cost, nor do we know exactly when it will go on sale. The Ford release accompanying the new video states that the new Raptor goes on sale in the fall of 2016, but it is unclear whether “go on sale” means that the company will begin taking orders or if this is when the trucks will begin reaching dealerships. If the new F150 Raptor is to arrive at dealers this fall, you would think that the company would begin taking orders from dealerships very soon.

However, just looking at the features of the 2017 Ford F150 Raptor with the truck sitting still at an auto show, it is clear that this new pickup is going to be a beast. It will almost certainly outperform the previous Raptor in every way, and with no real competition from the other major truckmakers – this new Raptor will surely be the best of its kind.

To show off how awesome the 2017 F150 Raptor will be, Ford has produced a series of six videos showing off the new high performance pickup and the first of those videos was introduced today.

Video 1: F-150 Raptor’s jaw-dropping off-road agility and capability
The first video in this series is titled “F-150 Raptor’s jaw-dropping off-road agility and capability”, so you can probably imagine what the video contains. It is 50 seconds of hardcore, high performance trucking with the new F150 Raptor blasting through the desert, with the unmistakable, high pitched roar of the specially tuned EcoBoost V6. The Raptor climbs through deep sand and blasts through sand dunes, followed by stints of high speed and even a few donuts in the dust. We even see the new F150 climbing through some rocks, showing off the serious suspension flex of the Fox high performance shocks.

This video is said to be the first of six in a monthly series, so it seems that the next video will arrive at the beginning of June. If they really stretch it out that long, the last videos will debut after the truck goes on sale, so perhaps the meant to say that the other videos will arrive this month. In any case, this first video of the new Raptor looks and sounds awesome, and I cannot wait to see these trucks on the road.

Panasonic Updates Profit Forecast, Noting How Much Tesla Batteries Help The Jump
2022 Porsche 911 GT3 Laps Nurburgring in 7:04 With Journalist Behind The Wheel
END_OF_DOCUMENT_TOKEN_TO_BE_REPLACED