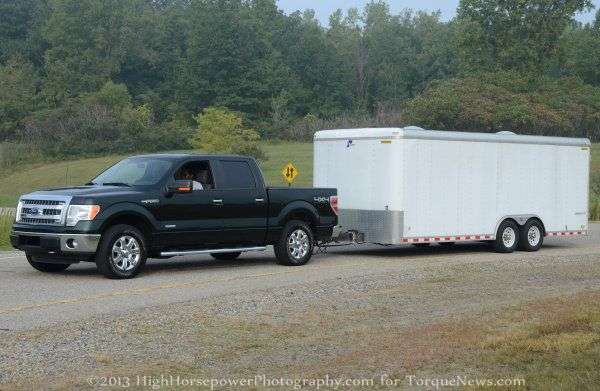 Ford Reminds Us Why the F150 is the Still the Greatest

Ford Motor Company recently had a small group of journalists to drive the 2014 Ford F150 against the newest half ton pickups in today’s market to remind us all that even though the competition vehicles are all very new – the F150 is still the king.
Advertisement

The current iteration of the Ford F150 was introduced in 2008 for the 2009 model year and to prepare for the launch of the 12th generation, Ford had a large group of journalists to their Michigan Proving Grounds where they provided us with the 2009 F150 along with the then-new 2009 Ram 1500, the Toyota Tundra and the Chevrolet Silverado. We performed a handful of driving exercises to see how the F150 sized up to the competition and not surprisingly – the bestselling truck in America was the most impressive truck in pretty much every exercise. Although the Toyota Tundra and the Chevrolet Silverado are brand spanking new for 2014 and the Ram 1500 has been gradually improved over the past few years, my recent trip to the Ford Michigan Proving Grounds showed that the F150 is still one of the top choices in the half ton truck market even though the F150 as we currently know it is sixth model year without any huge changes. Ford had three different experiments of sorts to run at the Michigan Proving Grounds including a towing exercise, a driving exercise in Ford’s grueling suspension durability and ride quality area and finally, a handling exercise where we swerved around some cones on a flooded vehicle dynamics course. Joining the handful of 2014 Ford F150 pickups powered by the 3.5L EcoBoost twin turbo V6 were the 2014 Ram 1500 powered by the 5.7L Hemi, the 2014 Chevrolet Silverado powered by the new 5.3L V8 and the 2014 Toyota Tundra powered by the 5.7L iForce V8.

Our first test was the handling exercise on the flooded vehicle dynamics course where we entered the wet area at 30 miles per hour and attempted to swerve, brake hard and straighten each of the four trucks out with the aid of the stability control and antilock braking system. The Ford was the best of the four trucks in this exercise but the advantage was minimal enough that the average consumer wouldn’t notice. All four trucks performed well on the flooded course with the Ford offering less understeer under braking than the others. However, when we took to the towing exercise, the difference between the 2014 Ford F150 and the other trucks was much more decisive. Each of the four trucks was hooked up to an enclosed car trailer with a curb weight of 9,000 pounds and with tow/haul mode engaged in each half ton pickup, we pulled onto the test track and stopped at the foot of a large incline. We were instructed to accelerate gently but to accelerate as quickly as possible up the steep hill and having gone through this exercise with each truck, the F150 and the Ram climbed the hill the easiest and built the most speed by the top of the hill when we began braking for an upcoming turn and downhill portion. The braking portion was fairly equal but the F150 and Ram shined above the other two on the big hill climb and unlike the other three trucks that stayed in second gear throughout the pull, the Ram was able to shift into third gear without any hesitation although the Ford was able to generate more speed than the Hemi Ram.

Finally, we headed onto the suspension and ride quality testing course with each of the four 2014 model year half ton trucks and took them through one of the roughest testing surfaces available in the country. This portion of the facility puts the trucks (and the human body) through the worst possible road conditions that simulate the worst bumps, ruts, potholes and general rough surfaces that the open world can drum up. The Ford F150 once again excelled, providing the smoothest ride on this incredible rough surface while also offering the best control as the trucks bounced around in the brutal driving conditions. This was the biggest eye opener during the testing procedure as it showed that while the Ford F150 hasn’t changed much since being introduced for the 2009 model year, it still holds an advantage over comparable trucks from other automakers. Even though the other trucks – most notably the Chevrolet Silverado and the Toyota Tundra – have introduced new generations, the “old” F150 is still the top dog in many situations including ride quality on rough surfaces and under heavy towing conditions..even when the competition is packing a V8 engine and the F150 is powered by the twin turbo V6. This is a clear indication of why the Ford F Series continues to be the nation’s bestselling truck and overall vehicle as even though the top competitors in the class have newer entries – they still struggle to compete with the Ford F150.