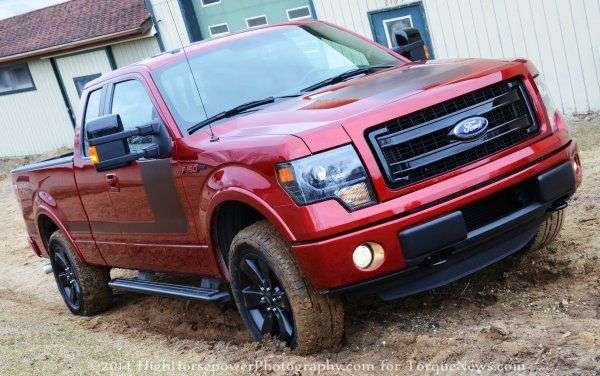 Ford Motor Company has issued a recall for a select group of 2014 F150 pickups over a concern that there could be a manufacturing problem with the Electronic Power Assist Steering system – a problem that is severe enough that the company has instructed owners to avoid driving their trucks until the problem is fixed.
Advertisement

The 2014 Ford F150 is equipped with an Electronic Power Assist Steering system (EPAS) that is used across much of the Ford corporate lineup and, unfortunately, it seems that a batch of 2014 F150 pickups made recently have an EPAS setup that was constructed incorrectly by a third party supplier. Ford hasn’t announced exactly what type of problems this recall issue can cause, but it must be fairly serious as the Motor Company has instructed owners not to drive their trucks until they have been repaired.

The Problem Comes from a Supplier
The 5,675 2014 Ford F150 pickups included in this recall were built between May 26 and June 19 of this year. The new F150 pickups built during that time with the base 3.7L V6, the 5.0L V8 or the 3.5L twin turbo EcoBoost engine are subject to this recall while the trucks fitted with the 6.2L V8 are not, as they use a more traditional hydraulic steering system rather than the EPAS system found in the rest of the new Ford half ton pickups.

These 5,675 2014 F150 pickups have an electric power assisted steering setup with a motor position sensor gear that may have been installed incorrectly by the supplier. This problem would likely either cause the F150 to not steer or to not steer as it should – either of which could greatly increase the likelihood of an accident if the EPAS system malfunctioned out on the road. Fortunately, there have been no reports of accidents or injuries as a result of this problem and the decision to recall these trucks comes after an internal investigation by Ford Motor Company rather than an order from the National Highway Traffic Safety Administration so as soon as Ford found the possible problem, they made the call to get those few trucks already sold back in for repairs.

Most of the F150 Pickups Included Havent Been Sold
The good news is that of the 5,675 2014 Ford F150 pickups affected by this new recall, only around 260 have actually been sold to new owners while the rest are still in the possession of dealerships – or they are still at the factory as they wait to be shipped out. Because of this, Ford Motor Company will only have to contact less than 300 customers and along those same lines, only 260-ish new F150 owners will need to park their trucks until the power steering system has been repaired under the recall order.

Because of this simple fact, Ford will only actually have to recall around 260 2014 F150 units while the other 5,515 will just be serviced by the dealership where they currently sit or where they are destined to arrive for sale. Those trucks included in this recall will not be available for sale to consumers until the problem is repaired, but reports indicate that the first step of the recall is the inspect the EPAS module and, if necessary, the dealership technician will replace the unit with one that has been manufactured correctly.

As always, the repairs made to the 2014 Ford F150 pickup under this recall will be performed free of charge.