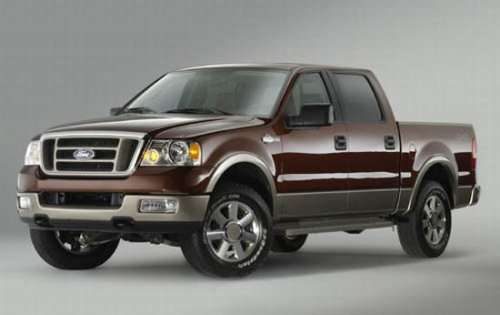 Ford Motor Company has announced a recall of certain 2005-2006 F150 pickups over a concern of airbags that could deploy without an impact triggering them.
Advertisement

The culprit in this latest Ford F150 recall is an airbag control wire located in the steering wheel assembly that may have been incorrectly located. When the wire is not run through the proper area, it could move around, possibly rubbing the protective coating off of the wire and when it grounds against metal around it, the airbag light could come on and in the most extreme cases – the airbag could open without any warning.

This Ford F150 airbag recall affects around 150,000 pickups from 2005 and 2006 but according to a National Highway Traffic Safety Administration memo in November 2010, the recall should pertain to vehicles ranging from 2004-2006 – with roughly 1.3 million trucks included. Should the government agency find that Ford’s recall of 150,000 2005-2006 F150s is inadequate, the NHTSA could call for a hearing to decide whether or not that automaker will be required to expand the recall to cover all vehicles included in the original investigation. Other than the 2004 model year, the discrepancy is based around the build location of the F150s involved as most of the incidents have occurred in trucks built at Ford’s Norfolk, Virginia production facility during the first shift. The majority of Ford F150s during that time were produced at Ford’s Michigan or Missouri plant but with the bulk of the problematic trucks coming out of Virginia – that is where Ford has focused their recall.

According to the NHTSA, when this safety investigation was launched last year, there were 238 cases in which the now-recalled F150 pickups experienced the airbags opening on their own – or not in the case of a collision. In many occurrences, the airbags deployed a few seconds after being started so the trucks were not in motion and this resulted in only minor injuries but the mere fact that the airbags could open on their own while driving presents a major safety risk to the occupants of the F150 along with others on the road around them. Even though the injuries are have reportedly been minor, 77 people have been injured by this Ford F150 airbag recall issue in the 238 known occurrences and this was enough for the NHTSA to pressure Ford to recall the trucks in question.

For the 150,000 Ford F150 pickups currently affected by this airbag recall, Ford will inspect the location of the airbag wiring causing this issue, repairing any issues as needed. Ford has pointed out that when this problem is in its early stages, the airbag warning light will illuminate prior to the airbag opening on its own so if you have a 2004-2006 Ford F150 with an airbag light that is coming on for seemingly no reason, it is a good idea to check with your local Ford dealership.

Recall notices for the 2005-2006 Ford F150 are expected to begin going out in early March and should the government decide that the current recall was not intensive enough, Ford may have to expand this recall to include another 1.15 million more trucks. TorqueNews.com will continue bringing you coverage of this issue as more information becomes available.

Anonymous wrote on June 2, 2011 - 9:51pm Permalink
yea just like the goverment motors recall all ford trucks . but just a small # of cruzes[ aka bruze] afterall its the airbag on the ford and only the steering wheel coming off on the bruze oh wait and the steering shaft & the shift rod wonder what else their hidingthe