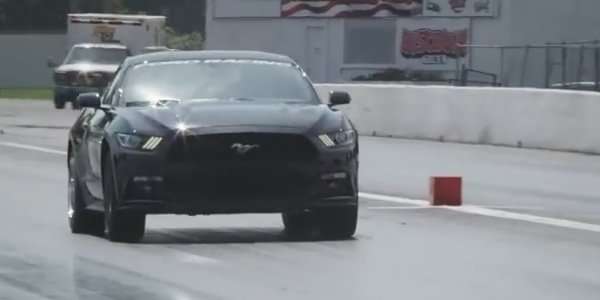 Ford Motor Company has decided that they wanted to oversee a bunch of “firsts” for the 2015 Mustang on the quarter mile so they headed to Milan raceway in Michigan with a trio of next generation pony cars – with a resulting video showing the EcoBoost Mustang in the 12s, an NA Mustang GT in the 11s and a supercharged Mustang GT in the 10s.
Advertisement

However, for this new Mustang, FoMoCo didn’t want to let aftermarket tuners steal their thunder so they three new 2015 Mustang fastbacks to the drag strip with a host of modifications from Ford Racing and the automaker achieved their goals – with their modified EcoBoost 4-cylinder model running mid 12s, their naturally aspirated Mustang GT running in the 11s and their blown Mustang GT running in the high 10s.

Those numbers are all very, very impressive for the 2015 Ford Mustang, but even more impressive is the minimal modifications needed to get these new pony cars to hit those lofty goals.

On that list, the only modifications that really make the car any faster are the rear subframe kit, the exhaust system, the engine calibration and the wheel/tire combo. The other features are simply safety features and Id be willing to bet that Ford could have run the same numbers without the heavy duty half shafts, the driveshaft loops, the roll cage or the Recaro seat.

The result of these modifications and what was likely at least a couple practice runs down the quarter mile is a 2015 Ford Mustang EcoBoost-4cylinder that runs a stunning 12.56 at 109 miles per hour.

The 2015 Ford Mustang GT NA on the ¼ Mile
After showing us how little is needed to put the new 4-cylinder EcoBoost Mustang into the 12s, the Ford Racing video shows the new 2015 Mustang GT with almost the same modifications. Along with the rear subframe kit, the driveshaft loops, the half shaft kit, the exhaust system, the engine calibration, the Recaro seat, the roll cage and the wheel/tire combo, the NA Mustang GT was fitted with a set of ARH Cobra Jet long tube headers. Again, the only truly functional features that have been added are the subframe kit, the exhaust, the tune and the headers – and this Mustang GT is able to lay down a quarter mile time of 11.77 at 116 miles per hour.

While the other features make the car more durable and safer, it looks like a 2015 Mustang GT with the 6-speed manual transmission and the key modifications mentioned above will put a good driver comfortably into the 11 second range.

A Supercharged 2015 Ford Mustang GT on the ¼ Mile
Finally, after showing off how easily the EcoBoost Mustang can get into the 12s and how little work is needed to put a naturally aspirated Mustang GT into the 11s, the Ford Racing video moves onto their supercharged Mustang GT. This final Mustang GT has the same modifications as the EcoBoost Mustang minus the exhaust system (it also does not have the headers like the NA Mustang GT) but it does wear a Ford Racing/Roush supercharger. This setup yields enough power for the new manually shifted Mustang GT to blast through the quarter mile in just 10.97 seconds with a trap speed of 128 miles per hour.

The key modifications from Ford Racing that helped put this 2015 Mustang GT into the 10s include the supercharger, the rear subframe kit, the engine calibration and the wheel/tire package.

What Does This Videos Really Tell Us
First and foremost, this video shows that the 2015 Ford Mustang in EcoBoost and GT form are capable of turning out incredible times with very few upgrades. Better yet, I cannot imagine that Ford Racing is going to show off what the 2015 Mustang can do with simple mods without quickly offering up those features from their own catalog. I would imagine that the company will quickly roll out a new performance parts catalog for the 2015 Mustang with all of the new go-fast components at work in this video so the first 2015 Mustang owners should be able to buy these components soon. Once they have these goodies, 2015 Mustang owners should be able to turn at least similar times to the ones in this video…if not better.

Of course, we should point out that drag racing can void the warranty of your 2015 Ford Mustang…even though the company has included track-only features in addition to offering up this video that shows just how well the next generation pony car will perform on the drag strip.

Wayne Rhodes wrote on August 31, 2015 - 8:24pm Permalink
I am a current owner of a 2015 eco-boost Mustang base model, with Automatic transmission. On order are a set of 3.73 rear sets and a limited slip 34 spline differential, A flash tuner from SCT with a race tune and a street tune also available if I choose to do so. Also a JTL cold air intake kit. A stainless works down pipe with catalytic converters delete pipe 3" mandrel bends stainless aluminum pipe. and Roush axel back exhaust kit. To round out my package, if I had known that Ford had a kit already for the I-4 Mustang I would have ordered it through you people instead. A new bigger inner cooler is the next Idem I will [email protected]@k into getting. Anyone have any advice or anything that will help me get a handle on the tuning of this engine. All help will be greatly appreciated from my heart to say the least.