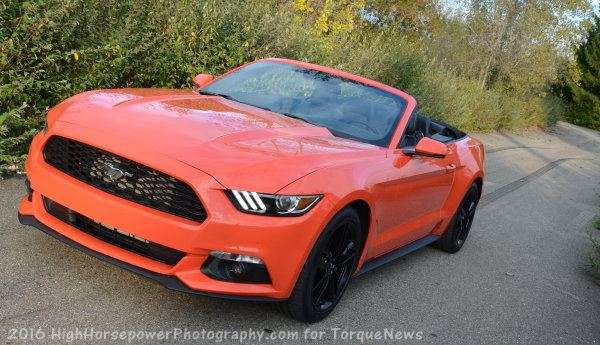 Ford Motor Company has just announced a new Ford Performance Power Package for the 2015+ EcoBoost Mustang and while this kit is “only” an engine calibration, the gains are significant – with the tuned 2.3L EcoBoost 4-cylinder engine offering 335 horsepower and 390lb-ft of torque.
Advertisement

Although the 4-cylinder engine is heavily criticized by the “muscle cars should only have a V8” crowd, the 2015+ Ford Mustang with the EcoBoost engine is an impressive performance car. With a combination of 310 horsepower and 320lb-ft of torque, the EcoBoost 4-cylinder is far more powerful than the current base V6 and it is more powerful than the Mustang GT from the previous generation, which offered just 300 horsepower in 2009.

Numbers aside, I have driven the new Ford Mustang with the EcoBoost engine and I can say, without a doubt, that it is better than the V6 Mustang. For a new car shopper who isn’t so concerned with big horsepower, but wants a little lower purchase price and better fuel economy, the EcoBoost Mustang is the most enjoyable non-V8 muscle car of the modern era.

Even though the EcoBoost Mustang is marketed as a sort of economy-performance model, Ford Performance has cooked up a tuning package which lifts the performance of the turbocharged 2.3L engine to levels just below the 5.0L V8.

Ford Performance Power Pack for the EcoBoost Mustang
The new Power Pack for the 2015+ Ford Mustang with the EcoBoost engine is pretty simple, as it is just a new engine calibration, but the engine tune makes a huge difference. Peak horsepower climbs from 310 to 335 and, more importantly, peak torque climbs from 320lb-ft to 390lb-ft – leaving the turbo-4 just 10lb-ft shy of the 5.0L torque figure.

In addition to those big peak power gains, the Power Pack for the EcoBoost Mustang shifts the entire power curve up significantly, with an average gain of 40hp and 60lb-ft of torque between 2,500 and 5,000rpm. From 5,500 to redline, the tuned EcoBoost makes an average of 75 horsepower and 64lb-ft of torque, and at 6,000rpm, the tuned EcoBoost engine makes 100 horsepower more than the stock engine. The result of the Power Pack is a turbocharged Mustang which will pull much harder through the mid-range and on the top end.

Most importantly, the Ford Performance Power Pack for the EcoBoost Mustang is fully emission compliant in all 50 states and if you have it installed at an authorized Ford dealership, it won’t have any impact on your factory drivetrain warranty.

Best of all, this emission compliant, warranty-safe engine calibration has an MSRP of just $699, so it serves as a very inexpensive way to add an extra 25 horsepower and 70lb-ft of torque to your turbocharged Ford Mustang.

April wrote on October 12, 2016 - 6:47pm Permalink
What a good deal. . Poor GT owners will be sad the eco boost is close to their power. But this is the future. With a v8 so many thousands more, This makes a lot of since. The grandfathers and ill informed people still think 'Its gotta have a v8'. But I got news. It doesn't. I still think the v6 is a nice basic Mustang. But the eco boost is a bargain. You can tune it for 700 wow. (see even a Camaro fan girl can see a good deal:P)
Bill Seifert wrote on October 13, 2016 - 4:51pm Permalink
Do I just go to the dealer where I bought my Ecoboost, and ask for the power chip? And they will be able to install it?