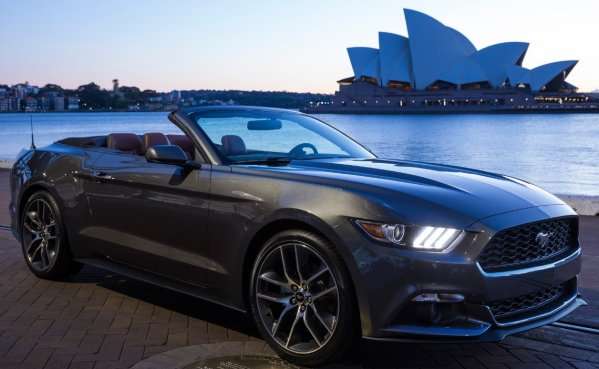 2015 Ford Mustang Global Sales
In 2015 the new Ford Mustang was available in 140 markets around the world and in those many areas, Ford sold a total of 141,868 new Mustang coupes and convertibles – making the Mustang the bestselling sporty 2-door in the world. Of that number, roughly 110,000 were Mustang coupes while the other 30,000 or so were Mustang convertibles, with the 110,000 hardtop models making the Mustang the bestselling sports coupe in the world as well.

“U.S. consumers have enjoyed interesting foreign sports cars for decades, so it was time for the Americans to return the favor with the worldwide launch of the new Mustang,” says Erich Merkle, Ford sales analyst. “Global markets have responded in a huge way. Ford Mustang was the only sports coupe in the world with more than 100,000 units registered last year.”

Mustang Around the World
While the majority of the 141k new Mustangs sold last year were registered in the United States, several key foreign markets helped Ford claim the title of the world’s bestselling sports coupe, including the United Kingdom, Australia, Germany and France. In total, there were more than 13,000 Mustangs ordered in Europe last year and in many of those markets, the car didn’t go on sale until the second half of the year.

In the UK, the new Mustang went on sale late in 2015 and by the end of the year, the company had received orders for more than 3,500 orders, with the first 1,000 being delivered last month.

As we reported last week, the Ford Mustang was the bestselling sports car in Germany in March 2016, and while that doesn’t add into the industry-leading sales numbers in 2015 – it shows how popular the new American muscle car is in a country known for producing great sports cars. Also, in Germany, the convertible accounts for about a third of all orders while the 5.0L V8 has a higher take rate than the turbocharged 2.3L EcoBoost engine.

In France, Ford is seeing more growth in 2016 and as was the case in Germany, the Mustang was the bestselling sports coupe in France in March 2016.

Finally, in addition to what Ford calls “incremental sales” from markets including South Africa, Cyprus and Malta, the Mustang has proven to be very popular in Australia, with the right hand drive Mustang sold out Down Under until the middle of 2017.

In short, the Ford Mustang was the bestselling sporty 2-door and the bestselling sports coupe in the world for 2015, and with strong numbers from new markets across the globe combined with growing sales from markets like China – Ford is likely looking to claim that same title for 2016.