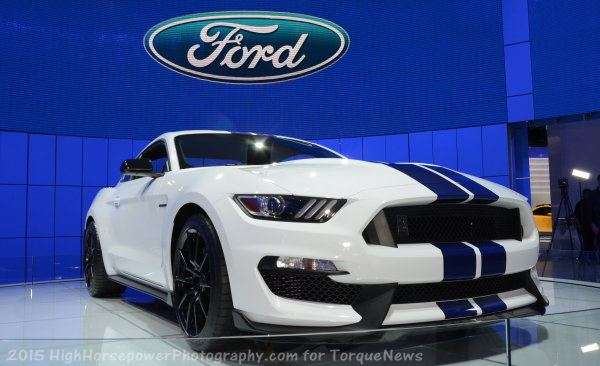 There have been some publications insisting that the Ford Mustang V8 is slowly being phased out, with EcoBoost V6 engines replacing them, but any reports that suggest that Ford wants to kill off the V8 is nothing but pure foolishness.
Advertisement

Since the new Ford GT and SVT Raptor F150 were introduced with new versions of the EcoBoost V6, there have been a few very stupid rumors going around the internet that insist that Ford Motor Company is going away from the V8. The focus of these fictitious reports center around the Mustang, and these “insider reports” state that with the rise of the EcoBoost V6, Ford has plans to stop offering the V8 Mustang after 2017.

Fortunately, several sources have spoken with Ford reps who have all made it very clear that the V8 isn’t going anywhere and if you look at the recent developments in the automotive industry – specifically with those vehicles packing a V8 engine – common sense should tell you that the V8 is alive and well.

Most Efficient V8 Engines Ever
We live in an era where the vehicles that are best known for having a V8 engine, like the Ford Mustang, the Chevrolet Camaro, the Chevrolet Corvette, the Dodge Challenger and all of the American half ton pickups, are all more powerful than they have ever been in the past. In the performance car segment, these cars are all more powerful and faster than any of the models that came before while in the truck world, these V8 pickups are more powerful and more capable than ever before. More importantly, these vehicles are all far more fuel efficient than any of the vehicles that came before them.

If you look at the modern Ford Mustang GT with the 430 horsepower 5.0L V8, it is more powerful than any naturally aspirated Mustang ever sold in the 50 year history of the model. At the same time, with an EPA expected figured of 25 miles per gallon on the highway, the 430hp 2015 Mustang GT is as efficient as the base model 1984 Mustang that had a naturally aspirated 4-cylinder engine with 88 horsepower.

That’s right – the 2015 Mustang GT 5.0L V8 with 430 horsepower offers the same fuel economy as the base model 1984 Mustang 4-cylinder with 88 horsepower. I’m not sure there is a better display of how far engine technology has come, and how much of a positive impact that makes on the future of the V8 engine.

V8 Engine Programs are Thriving
Aside from the fact that V8 engines are more efficient than ever, the simple fact that automakers including Ford Motor Company are spending big money on developing new V8 engines should prove that there is no intention to kill off the V8 engine in the mighty Mustang.

These asinine reports that 2017 would be the final model year for a V8 Mustang insist that the advanced developments with the 3.5L EcoBoost V6 was proof of the end of the V8 program, but they ignored the fact that Ford has just completed the costly and lengthy development of the new 5.2L flat plane V8 for the newest Shelby GT350 Mustangs. If Ford was going to stop using the V8 in the Mustang after 2017, they most certainly wouldn’t have spent the time and money to develop the new 5.2L V8 just for two model years.

Automakers all spend big money to constantly improve their V8 engine programs so unless something in the industry changes very, very drastically in the next few years, no Mustang fan should worry about the lack of a V8 Mustang anytime soon.
While it shocked some people when both the 2017 SVT Raptor F150 and the new Ford GT supercar were rolled out with super-tuned V6 engines, that move is a sign of Ford’s advancements in engine development. Those same developments are being applied to the V8 engine programs – which is evident in the new flat plane V8.

In other words, don’t believe everything that you read online. These fake news sites are becoming more and more popular and they gain that popularity by making outrageous, false claims like the end of the V8 Mustang after 2017. Fortunately, you can file that “news” in the trash big where it belongs.

The Ford Mustang V8 is alive and very well.

nick wrote on February 3, 2015 - 8:40pm Permalink
i agree and disagree. i think u mest up when you where saying how the 15 is like the 88. A BASE 15 should have the power of a GT 88 not the other eay around cuz then your goin backwards. u said a BASE(v-6)88 is as fuel efficient as a GT(v-8)15, thats saying the fuel efficiency hasent grown.its like sayin a 86 lambo is a 15 camry(u said the opposite).i feel like they are stoping v-8's but not in cars that currently are in massive production(mustang,f-150) but new concepts or limited production are being switched out. like i dont see them using(or hopefuly not)a 5.2 NA flat plane v-8 on a 2018 gt500(if it cones out) it better be better then the regular 5.8 s/c v-8,flat plane or not it better be s/c w/ 5.8l or more.