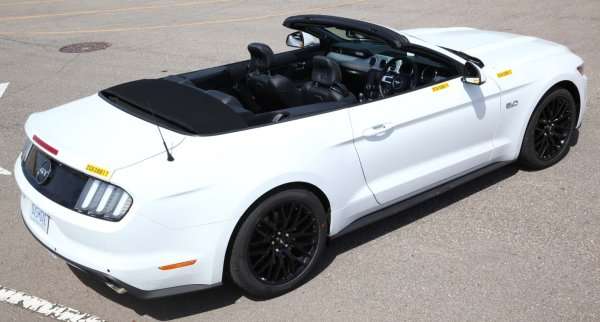 The new Ford Mustang is the first ever to be sold in South Africa with the preferred right hand drive configuration and like every other RHD market that has just gotten the new Mustang – the American muscle car is sold out well into the foreseeable future.
Advertisement

The newest generation of the Ford Mustang was introduced for the 2015 model year in the United States and that was a pretty big deal, as it isn’t often that the mighty Mustang enters a new generation. However, the arrival of this newest Mustang is a much bigger deal for American performance car lovers in countries like Australia, the United Kingdom, Japan, South Africa and a handful of others as this Mustang was the first ever to be offered with a factory right hand drive configuration.

In the past, some Ford fans in these right-drive markets could have purchased “grey market” cars from importers and from there, they could either drive them with the left-drive configuration or they could have paid the high price of having them converted to right hand drive. With the arrival of the newest Ford Mustang – arriving as 2015 or 2016 models depending on the market – those folks in Australia, the UK, South Africa and the others can buy a Mustang from their local Ford dealership that is already configured to be driven on what Americans consider the wrong side of the road.

Some people were skeptical that the relatively inefficient muscle car would do well enough in these RHD markets to justify the cost of developing and building the right-drive models, but all of those skeptics are 100% wrong. As we have previously reported, the Ford Mustang is sold out well into the future in both the UK and Australia, and we have no learned that the Mustang is sold out in South Africa through the 2017 calendar year.

Unfortunately, I was unable to pin down official sales numbers from Ford for the South African market, but in hunting around a few different websites based in that country, I found that Ford sold and delivered 29 Mustangs in March. In the US, Ford sold 12,563 Mustangs in March for an average of 405 units per day (based on dealerships being open every single day including Sunday). Based on a 12 hour day, Ford sold around 33 cars per hour, so the Motor Company sold more Mustangs in any given business hour in the US than they did in South Africa all of last month.

However, this isn’t about volume – this is about demand. The fact that the Mustang is sold out through 2017 even with the high price in the South African market is further proof that there is serious demand for right hand drive American muscle cars in multiple markets around the world.

The continued demand for the right hand drive Ford Mustang in these various markets will lead to not only more Mustangs in the future – but the success of the RHD Mustang in multiple markets should lead to a right-drive Chevrolet Camaro and Dodge Challenger.