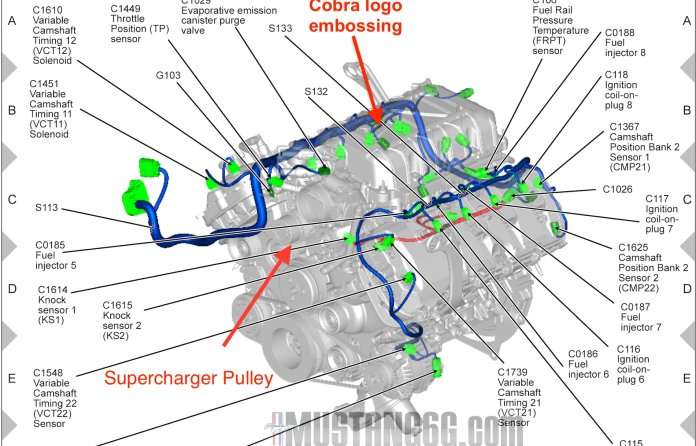 A set of images showing what appears to be the supercharged 5.2L V8 expected to power the new Ford Mustang GT500 have been posted by Mustang6g.com – reinforcing the rumors that there is a supercharged super-Stang on the way.
Advertisement

Earlier this month, a picture surfaced online showing what was reported to be the engine of the upcoming Ford Mustang Shelby GT500. That engine image clearly showed a Ford V8 engine with a big supercharger and on the supercharger lid was the familiar Shelby Cobra image and “5.2L”. It has long been rumored that the GT500 would feature a supercharged 5.2L V8 with big power, and that image was the first proof – although it was far from official confirmation.

This week, two CAD images have been posted to the enthusiast community Mustang6g.com and they appear to detail that same supercharged engine. These images reportedly came from Ford dealership materials and if they are legit – which the Motor Company of course will not confirm – these are two bigger pieces of the next generation Shelby GT500 Mustang puzzle.

The GT500 Supercharged 5.2L V8 CAD Images
The images posted to Mustang6g.com clearly show a supercharged V8 engine with the Shelby Cobra logo on the lid, leading us to believe that these are either excellent fakes or these are the real thing. If they are the real thing, these CAD images offer a look at the GT500’s supercharged 5.2L V8. While the grey scale finish to the image makes everything sort of melt together, we get a good look at the front belt-drive system, the throttle body location, the valve cover design and the supercharger. There are no surprises here, but it certainly appears as though the Motor Company is working on a supercharged V8.

The rumors suggest that the 2019 Ford Mustang Shelby GT500 will have a cross-plane (not flat-plane) 5.2L V8 with a top-mounted supercharger, all of which is expected to deliver somewhere in the range of 700-800 horsepower. It is widely expected that the GT500 will look to overpower the Dodge Challenger SRT Hellcat with 707 horsepower, so something like a 760 horsepower Shelby Mustang would allow Ford to brag about offering more power than the Hellcat Challenger and the new Corvette ZR1.

As you can see in the image above, when Mustang6g member zackmd1 shared the CAD images, he added some notes – pointing out the Shelby Cobra logo on the supercharger lid as well as the supercharger pulley.

Finally, the rumors indicate that the next Ford Mustang Shelby GT500 will arrive sometime in 2018 as a 2019 model year vehicle. If that is the case, we might just see the supercharged pony car at the upcoming Detroit Auto Show.