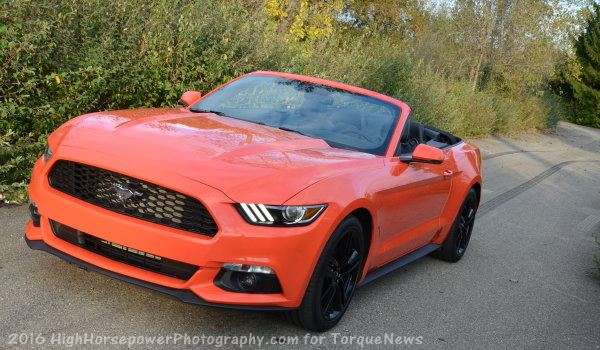 Ford Motor Company hasn’t rolled out the details on the 2017 Ford Mustang, but thanks to the official Ford brand website, we know that the majority of 2017 Mustangs will cost more than their 2016 counterparts – from the base model V6 fastback to the top-of-the-line Shelby GT350R.
Advertisement

Since being introduced for the 2015 model year, the “new” Ford Mustang bas dominated the muscle car segment, crushing the Chevrolet Camaro and the Dodge Challenger each and every month since the S550 platform went on sale in late 2014. Even with the introduction of the 6th generation Camaro, the Mustang sales pace has barely slowed over the past 2+ years, with more than 35,000 Mustangs sold in the past three months while the Camaro has only moved around 31,000 vehicles all of this year.

The Ford Mustang has once again risen to the top of the muscle car segment as buyers around the world have lined up for the newest version, but it looks like getting into the original pony car in 2017 will cost a bit more. The automaker hasn’t offered up any information on changes to the 2017 Mustang, but the Ford.com configurator tool shows that while some trimlines will maintain 2016 pricing, most models are getting at least a slight increase in price for the upcoming model year.

2017 Shelby Mustang with New Standard Features
First, let’s look at the 2017 Ford Mustang Shelby models, since we already have an idea as to what is changing for the new model year. We reported a few months back that the 2017 Shelby GT350 Mustang would be getting new standard features and new option packages, but we didn’t have any official pricing figures. Now we know that the 2017 GT350 will have an MSRP starting at $55,595 – an increase of $7,800 over the 2016 model year. For that extra money, 2017 Shelby GT350 buyers will get the Track Package features from 2016, including the MagneRide suspension, an aluminum strut tower brace, a new rear spoiler and a bevy of engine and transmission coolers.

Click here for more details on the 2017 Shelby Mustang.

2017 Mustang Fastback
Next up, we have the 5 trimlines for the 2017 Ford Mustang fastback – 4 of which will cost more for the new model year.

Finally, the 2017 Ford Mustang GT and GT Premium will both cost more, but the increases for the 435hp package are fairly small, with the “regular” GT price rising by just $250 to $32,645 while the more well-appointed GT Premium climbs by the same amount, to a new base price of $36,645.

2017 Mustang Convertible
Last yet most certainly not least, we have the 2017 Ford Mustang Convertible. As was the case with the EcoBoost fastback, the EcoBoost Premium Convertible retains its 2016 pricing for the new model year ($35,145), but both the V6 and the GT Premium convertibles will cost more in 2017. The V6 droptop increases by $500 for a 2017 MSRP of $30,145 and the GT Premium convertible increases by the same $250 as the GT fastbacks – leading to a new MSRP of $42,145.

As more information becomes available for the 2017 Ford Mustang, you can be sure to find it here on TorqueNews.com, but in the meantime, these early pricing figures will allow prospective buyers to begin planning their purchase. Really, unless you are buying a Shelby GT350 or the EcoBoost Premium fastback, the 2017 Mustang wont cost much more than the 2016 models and as a result, these price hikes aren’t likely to have much negative impact on Mustang sales going forward.