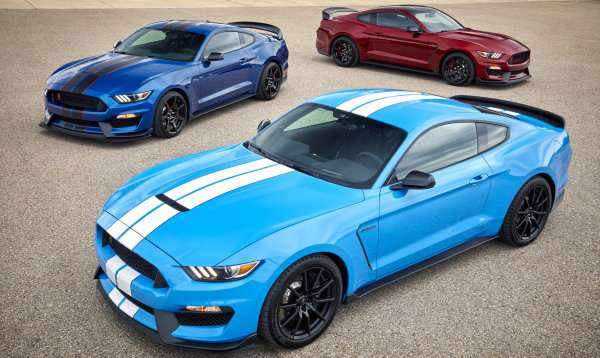 Back in February, we brought you the news of some changes coming for the 2017 Ford Shelby GT350 Mustang and while that information was technically unofficial – having come from a leaked document posted on an enthusiast forum – the official information on the 2017 model year Shelby Mustang has arrived and confirmed all of the leaked info from earlier in the year.
Advertisement

The 2016 Ford Shelby GT350 Mustang didn’t have a long list of available options, but buyers could pick from the Track Package or the Technology Package – but not both. That meant that if you wanted the MagneRide suspension system, the strut tower brace, the various engine, transmission and differential coolers and the high downforce rear spoiler of the Track Package, you could not get the Technology Package with heated leather seats, the SYNC3 infotainment package and the 9-speaker audio system.

With the 2016 Shelby GT350 Mustang, you could have premium performance or premium comforts, but for the 2017 Shelby Mustang, that has all changed, as you can now get the interior goodies with the performance features – with the go-fast components becoming standard for the 2016 model year.

“Ford Performance is always listening to customer feedback,” said Dave Pericak, global director, Ford Performance. “At the end of last year we started offering a back seat option for Shelby GT350R due to customer demand. Now, we have adjusted the packages available to continue to provide more of what customers want on the Shelby GT350 Mustang.”

2017 Shelby GT350 Mustang Changes
First off, the biggest change for the 2017 Ford Shelby GT350 Mustang is that the components of the 2015 Track Package are all now standard components on every new GT350. This includes the MagneRide suspension system, an aluminum strut tower brace, a high downforce rear spoiler (shown in the image above) and oil coolers for the engine, transmission and rear differential. Basically, every GT350 Mustang for the 2017 model year comes with all of the highest performance items.

Next up, the Technology Package from the 2016 model year is gone and in its place is a pair of interior upgrade packages. First, the new Electronics Package adds the SYNC 3 infotainment system with voice activated navigation and a 9 speaker audio system. The Convenience Package starts with all of the components of the Electronics Package and then replaces the Recaro race seats with a set of leather trimmed, power/heated/cooler front bucket seats.

More Features, Bigger Price
The press release talking about the new standard features don’t include any pricing numbers, but according to the crew at Autoblog, the 2017 Mustang GT350 in “base” form will have an MSRP of $56,495. The 2016 Shelby GT350 Mustang base price is $48,695 and when you add in the $6,500 Track Package, you come to a total price of $55,195, so if the Autoblog number is accurate, the 2017 Shelby Mustang is also getting a price increase of around $1,300 after the addition of the Track Package.

This price increase might bother some prospective buyers, but considering the popularity of the Track Package goodies – and the desire for the best-handling GT350 Mustang possible – the change to the better appointed and more expensive car makes sense.