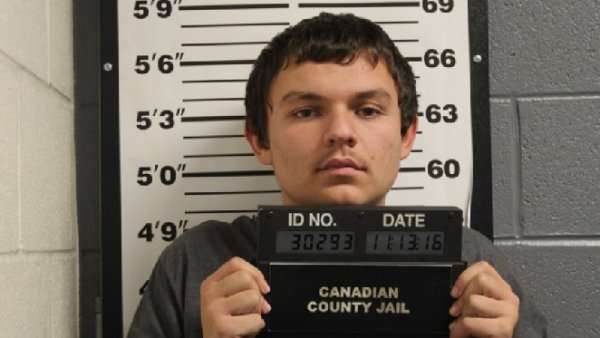 A news story has been traveling around social media which talks about a 19-year old Ford Mustang driver in Oklahoma who was clocked going 208mph and while it certainly makes for an interesting story – there is almost no way that he was going 208 miles per hour.
Advertisement

Earlier this week, 19-year old Hector Fraire (shown above) was arrested in Oklahoma City for reckless driving and felony eluding after reportedly being clocked at 208 miles per hour in his 2011 Ford Mustang. There were no further details on the vehicle from the local reports other than the fact that he was driving a 2011 Ford Mustang and was clocked three times – first at 84 miles per hour, then after pursuit began, once at 176 and a second time at 208. During this time, he also turned off his headlights and taillights, according to the report. The driver eventually stopped at a red light and tossed the keys out the window.

Of course, a story like that traveled quickly around the many automotive groups on Facebook as people discussed the shocking nature of a nutjob in a Ford Mustang going 208 miles per hour on a public road. Younger automotive enthusiasts praised the Mustang driver for his “damn the man” attitude in racing away from cops while more mature drivers – many of whom have a vehicle which will tickle the 200mph mark – were quick to chastise this guy for driving at such high speeds on public roads.

There is a third group in this discussion though, and I am in that group of people who simply don’t believe that a 2011 Ford Mustang was going 208 miles per hour on a public road.

208 in a 2011 Ford Mustang?
The 2011 Ford Mustang GT was powered by a 5.0L V8 with 412 horsepower and an electronically limited top speed of 155 miles per hour. That top speed limiter is easily removed with a handheld tuning device, but without adding significant power and some aerodynamic bits, the 200mph barrier is an impossible feature for a 2011 Mustang GT

The 2014 Shelby GT500 Mustang had a 662hp supercharged V8 and unique body parts which allowed it to hit 200 miles per hour, but that was achieved on a closed circuit track where the team had plenty of run-up time to hit 200. If you watch any high speed run, the speed increases very slowly when you get up around 200 in a modern supercar, so even if you had a modified 2014 GT500 Mustang with far more horsepower, it is questionable whether it would be able to reach 208mph without aerodynamic improvements and even if it would hit that speed – it would need a massive run-up area and a very smooth surface. It isn’t like the jump from 200-208 is like the jump from 90-98.

I don’t want to say that it is physically impossible for a 2011 Ford Mustang to go 208 miles per hour, because anything is possible with enough money, but even with a Mustang engineered to go more than 200 miles per hour, the car would require a very long, very smooth stretch of road to hit those speeds. If anyone has proof that a 2011 Ford Mustang will go 208 miles per hour on any sort of track, please post about it in the comments below, but right now, I believe that there was some sort of problem with the system used to check the speed of this Mustang.

I don’t question that this guy was driving fast enough to deserve the charges of reckless driving and felony evading, but it seems to be just shy of impossible for his 2011 Mustang to have been going 208 miles per hour. If this Mustang was actually going 208 miles per hour, Mr. Hector Fraire should drop me an email and tell us all about his incredible muscle car.