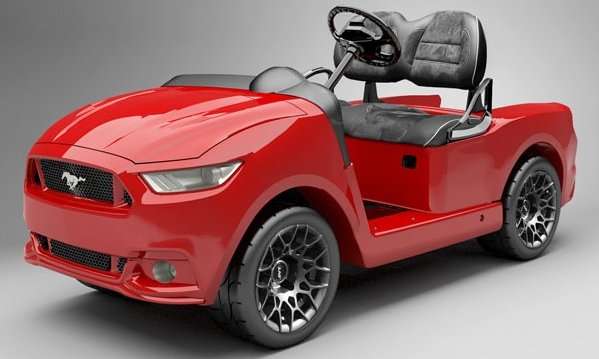 If you are a 2015 Ford Mustang owner and you love to golf – or simply love to drive around in a golf cart – a new mini-Mustang has hit the market that will surely turn heads everywhere it goes, but having the sportiest golf cart on the block doesn’t come cheap.
Advertisement

The awesome golf cart shown here is the 2015 Ford Mustang cart built and sold by Caddyshack Golf Cars of Palm Desert, California. Caddyshack has been in various automotive publications over the past few years thanks to their officially licensed Ford-styled golf carts including the 2012 Shelby GT500 Mustang, the 2014 Shelby GT500 Mustang, the SVT Raptor F150, the 2014 50 Years Mustang and the classic Shelby Cobra. Their newest offering is based on the 2015 Mustang and it looks as though the newest Caddyshack Golf Car is the most accurate when compared to the real thing.

The Caddyshack 2015 Mustang
Of course, the key feature of this new Caddyshack Golf Car is the great looking body, which is accurately styled to resemble the 2015 Ford Mustang. Up front, the Caddyshack Mustang has a similar face to that found on the real Ford Mustang and unlike the other Caddyshack Mustangs, the back of this new offering has the proper taillights of a 2015 Mustang. Other Mustang golf carts from Caddyshack had generic round taillights, but this new Mustang cart takes the exterior design to the next level. The headlights and taillights work with brake lights, turn signals and hazard lights. Finishing off the exterior design is a set of 12 inch SVT design aluminum wheels.

The 2015 Ford Mustang from Caddyshack is powered by a 48v electric drivetrain that allows it to reach speeds of 19.5 miles per hour on flat ground while going 35 miles on a single charge. I have a few electric golf carts (which do not resemble real cars, unfortunately), and my carts will go around 20 miles on a single charge while reaching a top speed of roughly 16 miles per hour. In other words, the Caddyshack 2015 Mustang is pretty quick and pretty efficient as factory stock 48v electric carts go. In addition to the great looking body and the powerful electric drivetrain, the 2015 Ford Mustang golf cart features full interior carpeting, vinyl bucket seats, a locking front trunk, a folding windshield and an interior headliner for the canopy that is not included in the images shown here. The area behind the seats comes with golf bag holders, although you can opt up to a rear-facing rear seat. You can also add an Alpine 4-speaker sound system with Bluetooth connectivity.

Golf Cart Style Doesn’t Come Cheap
The Caddyshack Golf Cars website doesn’t list prices, but in hunting around the internet a bit, I found that their 2014 Mustang GT500 cart had an MSRP of $15,490. Considering that the 2015 Mustang is more detailed than the GT500, I would expect that the newest Caddyshack Mustang has a price beginning up around $16,000. You can get into a “normal” name brand 2-person electric golf cart for around $8,000 new and around $5,000 for like new used condition, so compared to a run-of-the-mill cart, the Caddyshack 2015 Mustang costs about twice as much. However, even without the sporty body, the Caddyshack cart has more content than the $8,000 carts at your local public golf course.