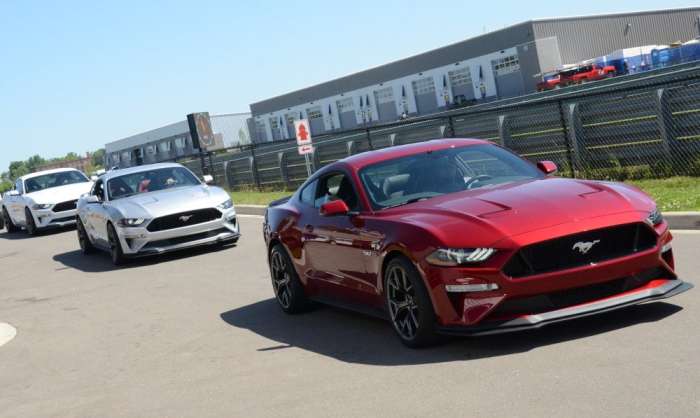 The sales numbers for September and for the third quarter of 2018 are in and once again the Ford Mustang was the bestselling two-door sporty coupe in the US market, beating the Dodge Challenger by about 300 units while the Chevrolet Camaro continues to fall well behind both of its rivals.
Advertisement

Since General Motors changed to the quarterly sales reporting method rather than monthly reports like FCA and Ford Motor Company, we have had to change our monthly muscle car sales review. In most months, we only have sales figures for the Ford Mustang and the Dodge Challenger, but at the end of each quarter, we get the numbers for the Chevrolet Camaro for the previous three months.

With October beginning the 4th quarter of 2018, we have quarterly sales numbers from Chevrolet along with the normal monthly sales figures from Dodge and Ford. As a result, we have numbers for all three American muscle cars from the first 9 months of the year, but as was the case at our last quarterly sales discussion – the Ford Mustang continues to dominate while the Chevrolet Camaro continues to struggle.

Ford Wins Again
The Ford Mustang moved 5,770 units last month, outselling the Dodge Challenger by 308 units in September 2018. This marks the 8th time out of the 9 months this year and the 31st out of the past 47 months where the Mustang has been the bestselling car in the segment, dating back to November 2014. Again, no monthly sales numbers are available for the Camaro, but based on the third quarter combined figures, the Chevy didn’t outsell either of the competitors over the past few months.

In terms of quarterly sales, Ford led the pack with 19,191 units sold in July, August and September combined. Dodge was second with 14,946 Challengers sold and the Chevrolet Camaro was third with 14,448 units sold. The Camaro only trailed the Challenger by about 500 units, which doesn’t seem so bad, but that was 500 more units that Chevrolet fell behind the rivals in the annual muscle car sales race – a race that is all but won by Ford at this point.

For those curious about some sort of monthly comparison, Chevrolet averaged 4,816 Camaro sales over each of the past three months. Dodge only sold 4,647 Challengers in August, so the Camaro may have actually finished second for that month, but it was still nowhere near the Mustang.

The Annual Race is Practically Over
On the year, Ford has sold 61,619 examples of the Mustang, followed by Dodge with 52,313 Challengers and the Camaro is far behind with just 39,828 units sold this year. Ford’s lead of 9,306 units over the Dodge isn’t insurmountable, but with three months left on the year, it is highly unlikely that the Challenger will beat the Mustang enough over that time to close the gap and take the 2018 title. We are likely to see a spike in Challenger sales later this year as the Redeye and more-powerful 2019 Hellcat begin reaching owners, but the odds are not good of closing that 9,300-unit gap over three months.

As for the Camaro, it is more or less guaranteed that Chevrolet will have to settle for third place in the 2018 muscle car sales race. The Camaro trails the Mustang by 21,791 units and the Challenger by 12,485 units. Based on the sales rate for the Camaro this year, Ford could stop selling Mustangs today and by year’s end, Chevrolet is unlikely to catch up, so there is no way that the Camaro has any shot at the title.

Now, if Chevrolet could manage to double Camaro sales over the final three months of the year while Challenger numbers remain consistent, Chevy could pull into the second spot, but that is highly unlikely. Provided that Chevrolet doesn’t pull off some sort of sales miracle, the Camaro will finish third in the annual muscle car sales race for the first time in the modern era of the American muscle car.

Raymond wrote on October 4, 2018 - 8:24am Permalink
Doesn't surprise me one bit the mustang is a superior car
Gian wrote on October 25, 2018 - 9:49pm Permalink
The engine choices in Camaros are excellent. The interior space and Visibility out are atrocious and need to be addressed asap... Challenger and Mustang are far more comfortable for the average driver and passenger. .
Mike Mucci wrote on December 25, 2018 - 3:40pm Permalink
Mustang has the advantage of a recognizable legacy for many decades. Challenger, having been in and out of the market over the same period must rely on quality and value in addition to performance. It's an uphill battle that over the years is paying off against a well-healed Mustang legacy. Maybe Camaro wil eventually get things figured out.