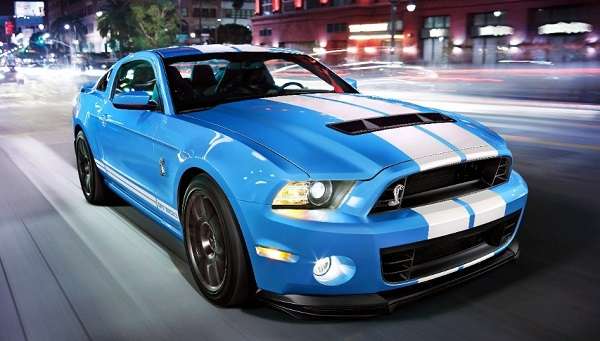 A new batch of rumors has kicked up, suggesting that a new Ford Mustang Shelby GT500 is on the way and, according to these rumors, this newest pony car will pack enough twin turbocharged power to help the Mustang reclaim the title of America's most powerful.
Advertisement

Prior to the arrival of the new (current) generation Ford Mustang, the previous Shelby GT500 Mustang was the most powerful production road car built by an American automaker. With 662hp, the GT500 Mustang was more powerful than the strongest Chevrolet Corvette or Dodge Viper and back in 2014, the 707hp Hellcat Challenger and Charger hadn’t hit the market yet. Back then, if you wanted to brag about having the most powerful stock production car in the US, the Mustang was by far the best choice.

However, when the new Shelby Mustang was introduced, Ford went away from the design theory of the GT500,opting instead for a road-hugging GT350 rather than a big power GT500. That new GT350 has done a fine job of satisfying the needs of Mustang owners who want to dominate a road course, but for those Ford fans who want a big power, straight-line monster – the GT350 falls a little short.

Due to that change in direction, the Ford Mustang fell behind both the Dodge Challenger SRT Hellcat and now the Chevrolet Camaro ZL1, but based on new rumors circling around the internet, a new GT500 Mustang is on the way and when it arrives – it could crush the cross-town rivals.

New GT500 Mustang Rumors
Now before getting into this newest batch of high performance Mustang rumors, I should address where this information originated.

Working in the automotive world, I know a great many “car guys” and “car girls”. Many of those hardcore enthusiasts – especially those living in Metro Detroit – have friends who work for automakers and some of those automaker employees are too quick to share classified information with their buddies. Those buddies then rush to Facebook to share that information and that is how these rumors begin without any official support from the automaker in question.

According to this unofficial insider information, there is a new Ford Mustang GT500 on the way and when it arrives, it will pack a twin turbo V8 with somewhere in the area of 750 to 800 horsepower.
Now, the odds are good that many of my regular readers are questioning this information and rightfully so, as any unofficial information like this should be taken with a grain of salt, but if the most basic aspect of this rumor is true – this Mustang could be a real beast.

Could It Be True?
I have said since before the new GT350 Mustang was introduced that Ford would not sit back and let the Dodge Challenger SRT Hellcat continue to claim the title of America’s most powerful muscle car. That being said, I have a hard time believing that it will have 750-800hp. I do believe that it could have a twin turbo V8 with enough power to out-muscle the Hellcat, but in a segment here every inch counts, I do not believe that Ford will offer a GT500 that grossly overpowers the Hellcat. A Mustang with 720hp would not only reclaim the title of America’s most powerful muscle car, but with the lightweight nature of the new Mustang, that big power should make it quicker and faster than the Hellcat Challenger.

Ford could most certainly produce an 800hp twin turbo V8 Mustang, but with rumors (also unsubstantiated) that the Hellcat will be getting a power bump in the next few years, I expect that Ford will roll out a new Mustang with more power than the Hellcat Challenger and the new Camaro ZL1. I also expect that Ford will keep some of that power in their pocket – just in case one of their rivals rolls out a more powerful version of their own muscle car

Now that both Dodge and Chevrolet have introduced their supercharged muscle cars with monster power, I expect that Ford will follow suit with a Mustang that will beat both of the other Detroit muscle cars. Will it really have a twin turbo V8 with 700-800 horsepower? Only time will tell…but the rumors suggest that the horsepower war is about to get even more violent. While I am as skeptical as always, I certainly hope that this newest rumor proves to be true.

Steve wrote on April 28, 2016 - 9:38am Permalink
I heard that rumor quite some time ago, clearly Ford has the parts in their bin to create such a beast. Now I am one that believes in strategy and the strategy behind these cars are to bring people into their showrooms - which at least to promote Mustang sales clearly is not needed. Therefore I believe this will remain a rumor so long as the Mustang is selling a a 2:1 rate compared to either the Camaro or Challenger. I see some value in not producing a high horsepower monster, and instead investing in adding 100 HP to the GT350 and solving requisite grip issues the Z28 comes out. A more likely scenario in my mind would be focusing on taking weight out of the Mustang - the only current fair criticism of the current generation. There have been spy photos of an S550 Mustang with what appears to be a different IRS attached, so that is evidence that they are infact working to take some weight out of it. Also I believe if Ford does in fact discontinue the GT350 in 2017, the GT ought to get the frame and body modifications that come on the GT350.
Matt wrote on May 7, 2016 - 10:31am Permalink
I don't think the GT 350 will be discontinued by Ford until it gets the 3.5 EcoBoost V6 that lives in the Raptor.
Don Martin wrote on May 10, 2016 - 11:45pm Permalink
I hope this rumor is true
John wrote on May 18, 2016 - 12:45am Permalink
Ford needs to go on a diet and learn what the word "Grip" and "Traction" mean. Anything over 600 hp/600 tq without grip,misnuseless as we saw with the GT500. But also, the GT500 needs an automatc trans, and not some silly 10 spd garbage. Something that's been proven. Such as what in the New C7 Z0. 3650 lbs wet, sticky Michelin sport cups. 11" wide rear wheels, 700-745 hp and 675-690 tq and the game is over for Hellcat. ZL1 would not stand a chance.
harmon wrote on June 9, 2016 - 12:38am Permalink
Speaking as an owner of a 2014 GT500, John is right. Still, I Love that car...
Tyler wrote on July 27, 2016 - 1:53pm Permalink
The older gt500 were supercharged as I would hope you knew already meaning all of its torque pretty much at the drop of a hammer being a twin turbo should help because you wouldn't get all of horsepower at once
John Brownlee wrote on August 28, 2016 - 12:25am Permalink
Hope GT500 with 800 HP comes out I'd love to own one with out a automatic they can't stand up to all that power for very long that the reason why Shelby stop putting them in when they came back out back in the day and I'm talking about late sixties and seventies they have more trouble with the automatic C6 transmission so Carroll Shelby learned a very serious lesson manual transmission no trouble automatic more trouble
Robby wrote on September 8, 2016 - 1:45pm Permalink
I think Tyler is on to something. The reason all the big inch big street racers use turbos is that with electronic waste gates they can manage their power curve via time, gear, etc. A factory could easily manage the waste gates via a balance between engine speed and wheel speed thereby giving the most power for the available grip. They do this already with timing in some cars, brakes in others. I hope they go wide body front and back so they can put more tire (330+) under the rear without causing a huge handling issue by balancing it with similarly wide front tires.