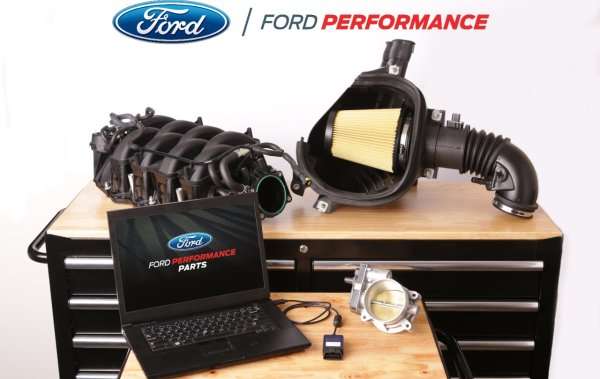 If you have been waiting for a warranty-safe way to add power to your 2015-2017 Ford Mustang GT with the 5.0L engine, you won’t be waiting much longer – as Ford Performance plans to ship the 456 and 472 horsepower Power Packs by the end of this month.
Advertisement

Earlier this year, Ford Motor Company announced that for the first time ever, the automaker would be offering three different tuning packages for the Ford Mustang GT. Unlike most automakers, who frown upon owners tinkering with the engine control unit to squeeze out more power, Ford offers up power-adding tuning packages for most of their high performance vehicles. However, the 2015-2017 Mustang GT is the first vehicle to get a 3-tier tuning system like the one Ford Performance will begin shipping later this month.

In the end, a 2015-2017 Ford Mustang GT owner can increase the output from 435 horsepower to 472 horsepower for just under $2,400. Most importantly, these Ford Performance Power Packs won’t void your warranty and they won’t prevent your Mustang from failing an emission test, even in California.

Power Pack 1 adds a high flow K&N air filter and an engine tune, lifting the output of the newest Mustang GTs to 448 horsepower and 416lb-ft of torque – all for just $529.

Power Park 2 adds the cold air intake setup from the new Shelby GT350 Mustang and an 87mm throttle body, which with the included engine tune lifts the output of the 5.0L V8 to 456hp and 424lb-ft of torque. This package has an MSRP of $949.

Finally, Power Pack 3 for the Ford Mustang GT adds the intake manifold from the new Shelby GT350, along with the 87mm throttle body, the GT350 cold air intake and a package-specific engine tune. The result of this system is 472 horsepower, but the torque number is unknown. The Ford Performance website says that this package only adds 5lb-ft of torque, but considering the torque gains for the first two packages, 5lb-ft seems like an oddly low gain. This package has an MSRP of $2,395.

It should be noted that to install the engine tunes, you will need a laptop powerful enough to run the software and to preserve your warranty, you will need to talk to your local Ford dealership about installation options. I would imagine that Power Pack 3 might require dealer installation, since installing the intake manifold incorrectly could have disastrous effects on the engine.

Warranty aside, once installed on any 2015, 2016 or 2017 Ford Mustang GT, these packages will increase the peak power, increase power throughout the powerband and the vehicle will still pass emission tests in all 50 states (or at least those states which have emission testing).

Ford Performance Power Pack 1 is available now and according to the Ford Performance website, both Power Pack 2 and Power Pack 3 for the 2015-2017 Mustang GT will be shipping by the end of the month. So, if you have been holding off for a warranty-safe, emission-friendly tune for your Mustang GT which will lift the output up over 470 horsepower – your time has almost come.

When paired with the EcoBoost tuning package from yesterday’s announcement, the Ford Mustang has the most factory tuning options of any American vehicle.

CHRIS COLE wrote on October 21, 2016 - 3:30pm Permalink
Hi, Does anyone know if this Performance 'Power Pack 3' is going to be available in the UK?

For Some Former Daimler Managers Daimler Is Authority, While Tesla Is Like a Startup
How Daimler Unintentionally Subsidizes Tesla Giga Berlin
END_OF_DOCUMENT_TOKEN_TO_BE_REPLACED